The History And Origins Of Sambo 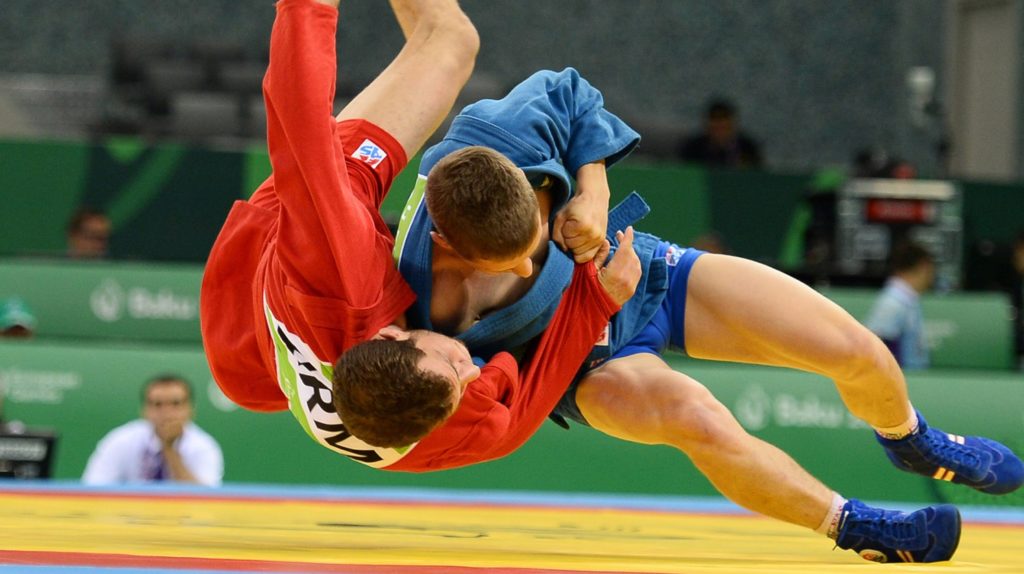 Perhaps the most interesting export of the former Soviet Union is the martial art known as Sambo. From a combination of Judo, Jiu-Jitsu, and a number of other styles of wrestling, the Soviets developed Sambo with the intention of enhancing the hand to hand combat skills of Soviet Military Personnel.

These days, Sambo is practiced worldwide. This partly down to the success of particular Russian mixed martial artists, which has led to more and more fans are falling in love with the sport. Given its interesting back story, it is not difficult to see why.

Modernly associated with the legendary four-time World Champion Fedor Emelianenko and two-time Combat Sambo World Champion Khabib Nurmagomedov, the sport is attracting more practitioners outside of what was once the Eastern Bloc.

Sambo is renowned for three key attributes: takedowns, ground control skills, and leg locks. But, there is more to the discipline that meets the eye.

Vasili Oshchepov and Viktor Spiridonov are considered the founding fathers of the martial art.

Oshchepov and Spiridonov collaborated independently with a team of other experts from the Soviet Union with the target of improving upon Soviet Military hand to hand combat training, as mentioned earlier.

What helped these guys achieve their aim was that both had extensive backgrounds in martial arts.

Vasili Oschepkov was one of the first foreigners to study Judo in Japan, which he went on to teach to the elite Red Army forces. He was a second-degree black belt and a former student of Kano Jigoro (the founder of Judo).

Viktor Spiridonov had a strong background in Greco Roman wrestling, freestyle wrestling, and a keen interest in Japanese Jiu-Jitsu. Throughout the 1920s and 30s, they spent their time testing and merging various martial arts techniques so as to create the new system.

From here, they incorporated throwing elements from Judo, karate striking, and various types of wrestling from that came from Uzbek and Tatar folk wrestling, to name but a few. Of course, they needed a name for the newly developed sport and settled on a portmanteau, Sambo, from САМозащита Без Оружия-samozashita bez oruzhia, which means combat without weapons.

Sambo was recognized as the country’s official combat sport in 1938 with much help from the USSR All-Union Sports Committee. Many revisionists say its rollout as a national sport was a strategic method of uniting the various ethnic groups within the USSR, through the fusion of all traditional martial arts under one central organization.

You see, the communist policy of the time was to actively discourage pre-communist traditions, so the newest creation ticked another box in that context.

Whichever way you look upon it, the program was a huge success.

The sport was practiced widely by the military and secret police that had a variation known as combat Sambo. This allowed for the inclusion of chokes, strikes, and weapon disarmament techniques. Cross-training and experimentation led to further variations in styles; like all martial arts, techniques are malleable and open to improvement and change.

Sambo was, in essence, a Soviet mixed martial art. However, it was only common amongst those residing within the USSR. But, as the sport continued to grow in popularity throughout the USSR, it became commonly practiced amongst public servants and citizens alike.

Sambo is not as globally popular as the likes of Brazilian Jiu-Jitsu (BJJ). Although very popular in Russia and the former Soviet Republics, Sambo was practically unheard of around the rest of the world. Soviets were not marketing or exporting their creation, after all.

One of the by-products of this was that the various forms of Sambo tended to remain behind the Iron Curtain until the mid-1960s when Soviet practitioners began having notable success in international Judo competitions. Then, European and Japanese interest in the sport slowly started to grow, and the practice was beginning to raise eyebrows further afield.

Fighters were interested in this exciting new system, which had many similarities to Judo but packed in a greater variety of moves, including leg locks and ground grappling techniques. So much so that, in the 1970s, Sambo made its way to the United States and was being taught alongside Judo and wrestling,

Off the back of this, the Sambo community created an official body in 1985 – the Federation International Amateur Sambo, also known as FIAS. Unfortunately, the organization split in 1993, and there were subsequently two separate organizations named FIAS, one based in Russia and the other being of US and Western European control.

The lack of unity and various disagreements took their toll on the reputation of the sport, and Sambo’s credibility began to diminish. 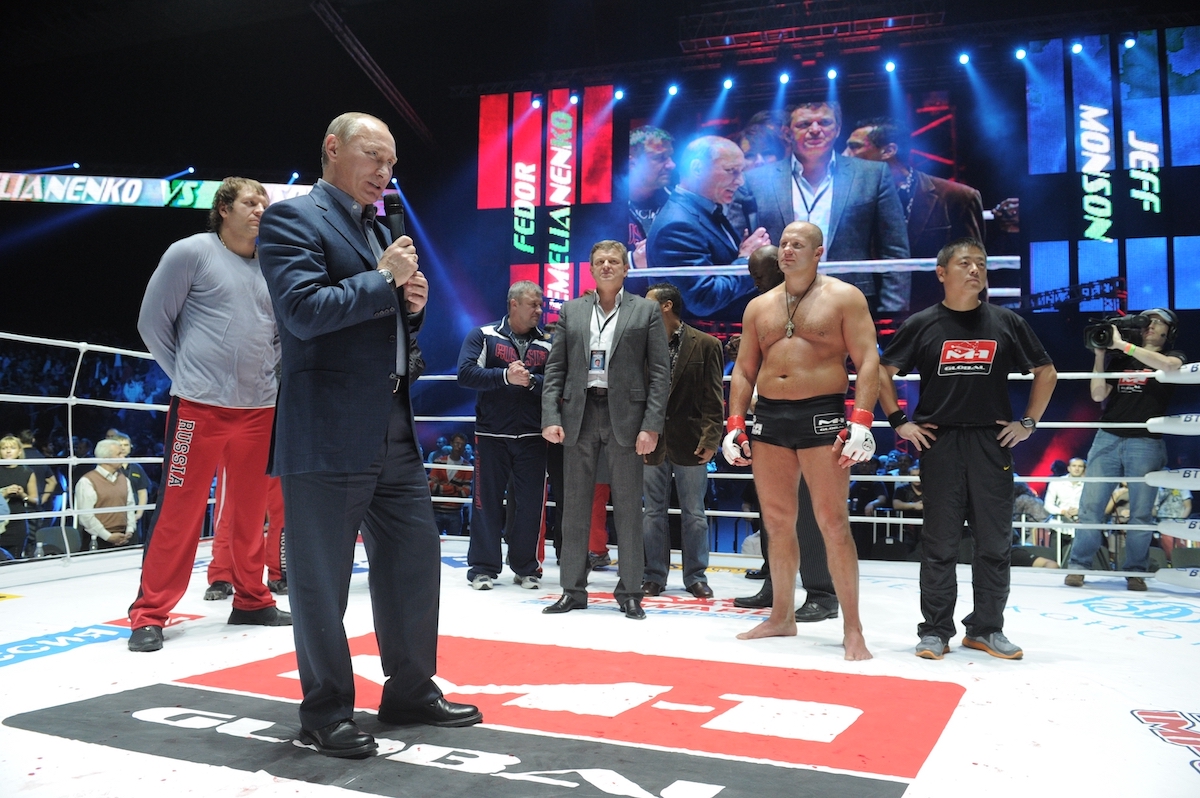 BJJ was on the rise in the USA and by the early 1990s when the Gracie family burst onto the scene with the family brand known as Gracie Jiu-Jitsu. In 1993, Royce Gracie was the smallest participant in the newly formed UFC, and his dominance within the competition was a huge launchpad for the growth of the sport.

BJJ quickly flourished and grew into one of the most popular disciplines in the USA and beyond, whereas Sambo now seemed to be struggling for any limelight. The outlook for Sambo wasn’t good, and it seemed that it had lost its time to shine, becoming dwarfed in the shadow of its Brazilian counterpart.

The UFC continued to grow, however, and the popularity of mixed martial arts blossomed around the world, especially with the ever-expanding internet. Over time, more MMA organizations were formed, and fighting competitions became mainstream entertainment. Practitioners such as Fedor Emelianenko and Andrei Arlovski started to make their mark in the MMA community, which helped.

Sambo world champions were once again put in the spotlight, and this provided a new lease of life for the sport. Interests were stirred, and people were again looking towards Sambo with intrigue, studying its style and evaluating its benefits.

Sambo was always very popular in Russia and wasn’t going to phase out any time soon. Even President Putin is a great proponent of the sport of which he himself is a talented practitioner. That said, the likes of Khabib Nurmagomedov is one of the many faces currently associated with modern-day Sambo, helping the sport to slowly but consistently grow in appeal.

In the USA and Europe, the amount of people taking up Sambo has increased substantially over the past decade. However, it’s hard to envisage it ever being on par with the demand for BJJ. Still, mixed martial arts is continually adapting, and Sambo training will most likely have more input into the likes of MMA.

As it stands, some of the crushing leg locks and throws have been incorporated into general MMA training, much of this resulting from BJJ practitioners embracing the techniques into the open-source art.

It is sad to think that the fractured growth of Sambo in the West – when compared to BJJ – seems to derive from its lack of exposure.

Still, in time, this could change. In fact, we are already seeing a bright future for Sambo.