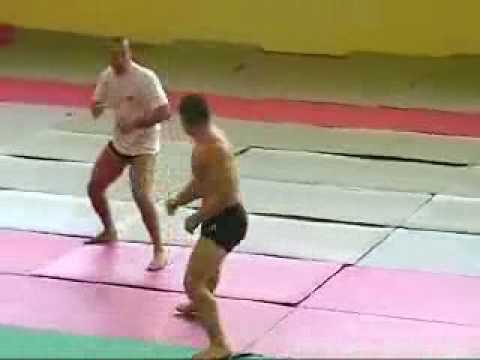 Back in 2003, Robin Gracie, the youngest of Helio Gracie’s sons, who runs Gracie Barcelona was conducting a seminar in Perpignan, France. Perpignan is about 1h30 drive away from Barcelona. Damien Riccio (who died in 2016 from a hearth attack), a French MMA fighter and karate black belt, had learned of Gracie’s presence in his city and used the occasion to respond to the infamous Gracie challenge (usually challenges for money or honor that the Gracie family issued to different martial artists). So Riccio showed up uninvited to Robin Gracie’s seminar and challenged Robin Gracie to a vale tudo match there and then. Robin accepted even though he wasn’t prepared. Damien won the fight. What happened next: The video of the fight went all over the internet and the whole BJJ and MMA community saw it. Royce Gracie, Robin’s older brother sent Damien some threatening emails (Which you can see below) and promised revenge. Royce, Robin and some of his students then crossed the border from Spain to France and attacked Damien in the bar where he was working in Perpignan. There have been many versions as to what happened next and I guess nobody will really know the truth as there are opposing views. Some people say that Royce kicked Damien’s little brother to the floor, and that Damien fired a gun into the air to end the scuffle…The Gracies fled and went back to Barcelona. A lot has happened to Damien since then. He went o having a MMA career fighting mostly in the Uk and even in Japan, with mixed results. His little brother died in a rock climbing accident. Damien was in 2 serious motorbike accidents. Damien’s older brother Matthias (also a fighter) was stabbed in the arm in a road rage incident. Damien ended up dying from a heart attack a few years ago. What I think: I have trained once at Robin’s academy Gracie Barcelona and met Robin on multiple times. He always seemed like a very nice, polite and cool guy. I never met Damien, but I know his brother Matthias, from my time spent living and training in the south of France. The Riccio brothers are very famous in Perpignan, and they have many brothers in their family. They are tough guys with big hearts. They are nice and full of jokes but they are not the kind of people that you would want to mess with. They are kind of similar to the Gracie family in that respect. Which is why this whole story is tragic as both the Gracies and the Riccio family could have actually been allies and not enemies.

This is the email communication between Royce, Rodrigo Gracie and Damien Riccio as posted by Royce on the Atama BJJ forum himself:
****************

From: RoyceGracie
Date: 29-May-03 12:38 PM
Member Since: 01-Jan-01
705 Total Posts The guy show up at Robin’s seminar and started to talk sh*t and wanted to fight Robin, so Robin did. Then fought the guy punch Robin and Robin shot in, the guy spralled, Robin pulled guard and punch him from the guard, the blood on Robin’s shirt is from the guys face. Then the fight stopped. Robin said to the guy that they should setup a time anytime he wants to and have a fight for real. The guy started talking sh*t about my family and all my brothers and all the Brazilians saying that they are nothing. I am in Spain right now, I am going to take care of this m****er. Robin invited him to my seminar this weekend so that we can have a fight and I will show him what Brazilians are all about, he guy already back down, saying that he has to work that weekend, but he will try. Well if he dont come, I will go see him. that is the story.
****************
Damien Riccio then replied:

For ROYCE GRACIE AND RODRIGO HI

i’m damien RICCIO the guys who challenge your brother Robin during a seminar in My town PERPIGNAN in FRANCE.

You talk very trash about me and something you don’t know.

I DID WHAT YOU ALWAYS DID TO MAKE YOUR NAME KNOWN!!!!

I challenged him very pleasantly respectfull and he agrees. He could say no and i got back but he accept smily and say ok. I got back and let Robin finish his seminar (without loosing any energy with rolling with guys).

I came back for fighting and Robin tapped down after a complete domination.

Where is the problem???

The only problem is that: he accepted and lost in what you claimed to be undefeated :REAL FIGHT.

So I never disrespect your family or Brasilians.

I told to Robin that you were my idol because when I saw royce and rickson for the First time on UFC and VALE TUDO it was for me a dream.

BUT NOW : I saw you insult me and disrespect me and I am very very surprised.

But right now I do not respect you at all for your trash talking about me and I am very disapointed by your attitude.

But right now by these words I know that you are not respectfull people and you will never beat me.

you just act like bad streetfighter and not professional and I know i will crush you.

SO now RODRIGO I tell it to you : you are a son of b*tch and you will be the easier Gracie to beat regarding your poors bad fights in Pride.

ROYCE I am now injure because of two long fight in 2 weeks but i accept your challenge when you want.

But for this week end i cannot fight but my young brother MATTHIAS will be happy to kick your *ss if you come in my town.

By the way we are too 7 RICCIO.

sorry for my bad english.

Royce and Rodrigo Gracie replied to him:

Let me tell you something, in Gracie in Action they came to our school, not challange us in the seminars, and if you saw it, they all got their *sses kicked.
That is what is going to happend to you your brothers or anyone else.

You call your self a professional?Walking in the middle of the seminar to fight my cousin unprepared? For me you are a nobody and a p*ssy.Royce is an hour away from you and you already p*ssy out.All i have to say is “is going to be a surprise party”.I saw your fight and checked your background, YOU REALLY SUCK! If robin was prepared you would be r*ped. Pride??keep dreaming…This is personal! I’ll see the rest of you soon, after Royce and Robin break your face.