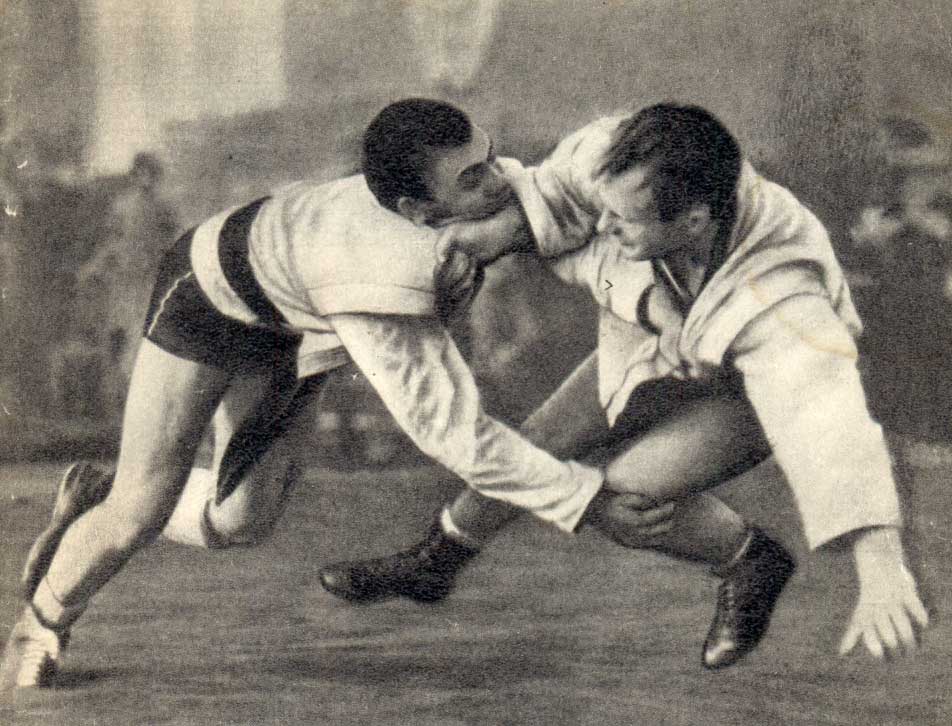 In 1920’s, a special system of self-defense was created in the USSR to train the Army and police officers. A group of enthusiasts from different sports societies started dealing with this problem. Developers paid a special attention to studying the holds of national single combat events: Uzbek Kurash, Georgian Chidaoba, Armenian Kokh, Russian Fist Fighting. Japanese Jujitsu, Mongolian Bukh Barilda, Chinese Shuai Jiao, French Wrestling, Judo and French Boxing Savate had a significant effect on the formation of Sambo. In 1923, a Sambo section was established in Dynamo Sports Society, as a new martial art. Sambo obtained its official recognition as “self-defense without weapons” on November 16, 1938. Thanks to its origin, Sambo possessed, from the very beginning, a rich arsenal of painful holds, advanced fighting techniques in standing and ground positions and combinational tactics in holding the bouts. Sambo techniques advantage was proved already in the first years of this sport appearance. Sambo fighters practically won all the bouts competing with the representatives of other Single Combat sports. At present Sambo is a dynamically developing sport that keeps on perfecting.

According to black belt magazine the first Sambo vs Judo challenge match happened in 1965 in Japan. Here is a a excerpt from a old article from the 60’s recounting Sambo’s growth in the Soviet Union and Eastern block and talking about the Judo vs Sambo challenge matches:

” Since its beginning in the mid-1930s, sambo has experienced a meteoric rise in the Soviet Union. Officially accepted by the National Sports Committee in 1938 as an authentic form of Russian wrestling, it’s grown to the point at which the Soviets are beginning to export the art. It’s already established in Communist bloc countries in Eastern Europe, especially in Bulgaria and Romania. As part of the drive to internationalize the sport, the Soviet Union has set up the World Sambo Federation.

The non-Communist world got its first close-up look at the sport last summer when a team of Russian sambo men invaded Japan for a series of goodwill matches. The Japanese showed an interest in sambo, and in 1965 they set up the Japanese Sambo Federation. The number of Japanese practitioners is small — perhaps only 100 or so — but they’re enthusiastic. Most are former judomen, with some holding high rank.

However, the results of last summer’s matches with the burly Russians showed that Japanese sambo enthusiasts still have a long way to go before they attain the excellence their fellow countrymen have shown in judo. The Russian sambo players crushed the Japanese, winning 14 of 16 matches.

The results stand in contrast with a series of matches held three years earlier in Japan. At that time, a group of Russian sambo stylists came to Japan to compete against a group of judo players in judo matches. After a week of intensive study at the Kodokan, the Russians were turned loose against the Japanese, most of whom were either third- or fourth-degree black belts. Showing their flexibility for competing in other styles, several of the Russians proceeded to stack up the opposition. 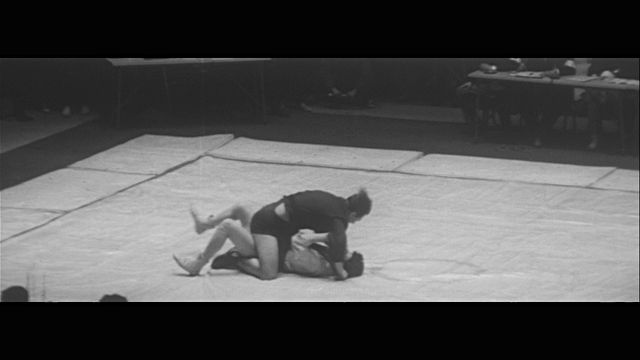 The Russian sambo men fought the Japanese to a standoff. It wasn’t until the final night and final match that the Japanese were able to eke out an 8-7 win over the visitors. During the tour, Genrikh Shults, a schoolteacher and six-time national sambo champ of Russia, defeated three of his opponents and tied a fourth. Crowed the exultant Shults when it was over, “I could have won every match by a fall if I had been in Japan a little longer.”

The shocked Japanese were quick to offer reasons for the showing. “The Japanese were not the best, and they were competing in exhibitions, not for keeps,” said Koji Sone, a former world judo champion. Undoubtedly, there was some truth in that. At the same time, the Russian sambo men were certainly some of the best the country had to offer.

Nonetheless, the Russian performance made an impression on a number of Japanese, and interest in sambo picked up from that time. Last summer, nobody was underrating the sambo practitioners when they arrived on a wrestling tour. And the Russians disappointed no one. ”