The Difference Between Rickson & Helio Gracie’s Style of Jiu-Jitsu 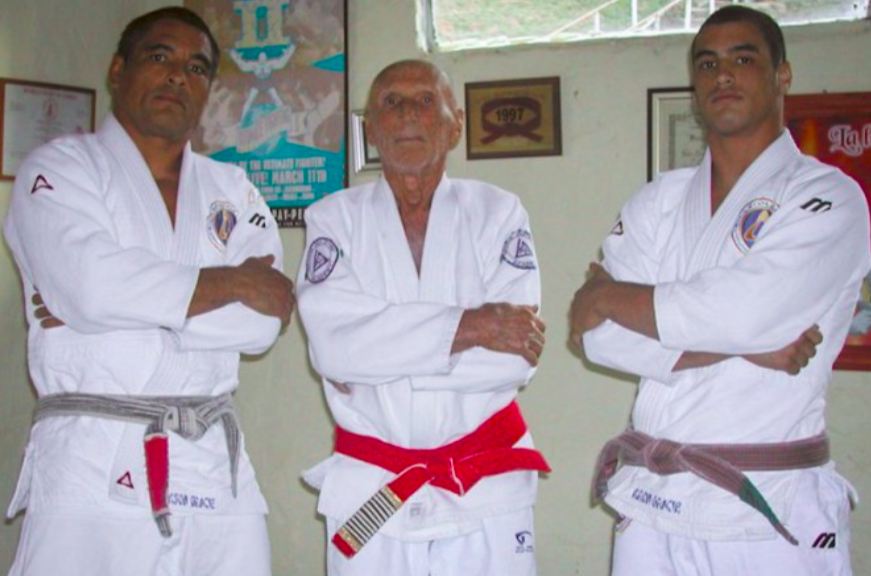 Kron Gracie, the son of Rickson Gracie talks about the difference between the styles of Jiu-Jitsu of his grandfather, Helio Gracie and his father Rickson Gracie.

For Kron, Helio Gracie should be credited for developing the concepts of the guard and of leverage in Jiu-Jitsu.

My dad put on all the connection, all the weight distribution. That’s what my dad invented. That’s the next level. Everybody who learned from my grandfather, learned the leverage and then they put in the strength and that’s the Jiu-Jitsu that you see today.

My dad is a completely different martial artist. Hopefully if I’m good enough, I can add some stuff too. Henry told BJJEE about what he learned from Rickson about how to put ridiculous amounts of pressure on your opponent from cross side position:

“As with all of my “side control” training systems… first things first….

Rickson sees and does things different than the average joe.

And in turn… just like every other position we see, engage with and refer to, this position is treated differently as well…  from here forward its not “side mount” its “Cross Side”…

I’m not saying this to debate semantics, I just to avoid any confusion.

When most people say “side mount”, Rickson, Myself and my Students say “Cross Side” and inside this Cross Side “Heavy As A Dead Whale” course you’ll get to see first hand WHY we see the position DIFFERENTLY.

My favorite dominant position is Cross Side simply because you have so many options and your opponent has so few.

However the position that just might be the most dynamic that gives you almost INFINITE options for submission, position advancement and mental destruction of your opponent is Cross Side (aka side control).

ie. willingly giving up side control OR being UNABLE to maintain.

Or advance with DOMINANT CONTROL from the cross side position.

If you’re EVER getting to cross side only to find your opponents getting to their knees or shrimping away or causing some sort of scramble….

I’ve got answers for you in this course.

Truth is if you’re getting to cross side and experiencing ANYTHING other than complete and total DOMINANCE & CONTROL then you’re missing critical fundamentals you MUST acquire to maximize your top control in this position.

Most importantly is how you THINK while ON YOUR WAY to the cross side position.  This alone will revolutionize your CONTROL once you get there.

I’ve got something extremely special up my sleeve that will allow you to CONTROL & DOMINATE from the top of Cross Side (side control) AND have BOTH hands free to attack or advance in any way you like.

This course immediately turns you into a “finisher” from the top of the Cross Side (side control) position and a sheer TERROR for anyone facing you.

I want you OUT of harms way and I want you FINISHING the engagement whether its on the street, training in the gym or competing at a highest level.

The “magic” in my “Heavy As A Dead Whale” Side CONTROL System is the fact that ALL your opponents escapes become 100% PREDICTABLE simply based upon HOW you enter into and execute your cross side (side control) position!

These are NOT not some “theoretical ideas” about the cross side position.  What I’m saying is this…

By using the control, positioning and attacks in this course I GUARANTEE your regular training partners will FEVERISHLY PANIC when you arrive in cross side.

They will be so fearful and intimidated by your top control they will roll the moment they failed to stop you from passing their guard and more importantly  they will gladly and quickly give up their back or mount willingly just to avoid your “Heavy As A Dead Whale” Pressure.

Whether you’re a white belt who’d prefer to learn your cross side pressure, control and top game RIGHT the FIRST time around or if you’re a belt of color who’d love nothing more than to make cross side an “terrifying nightmare”  for any opponent…

My “Heavy As A Dead Whale” Cross Side CONTROL System is exactly what you’ve been looking for.

Then this is the ONLY systematic approach to DOMINATION & CONTROL of Cross side (side control) you need.”