The development of Luta Livre and Vale Tudo in Brazil. Part VIII 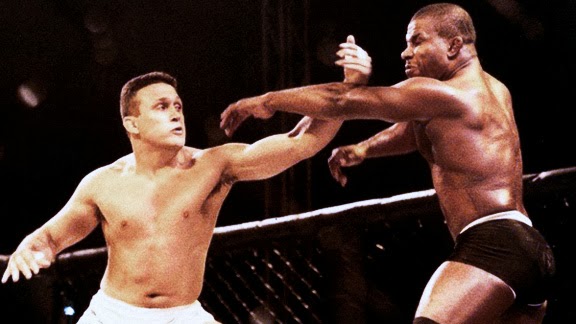 The development of Luta Livre and Vale Tudo in Brazil. Part VIII

Copyright (2014) by Sportscientist  Maciel Welko & Elton Silva. Unauthorized use, reproduction, translation, modification, distribution or duplication, in whole or in part of this article and its content is strictly prohibited. But you are invited and allowed to share the link of this article.

Much of the history of “Luta Livre” in Brazil is anecdotal and there is no proof of evidence. Systematic research done by Sportscientist and Luta Livre Instructor Maciel Welko in collaboration with E. Silva, shows a more credible description of the historical development of “Luta Livre” in Brazil. This publication is a summary from more than 9000 collected and evaluated written records* under the standards of scientific research. The references, as longer and more detailed versions, will be addressed in the books of the Authors to be published soon:

“Catch; the root of Luta Livre in Brazil”

A Part of History Almost Erased

Mestre Tatú and the Olympic style of wrestling

The true pioneers of Brazil’s Olympic Freestyle of Wrestling

In 1949, the first Olympic Freestyle Wrestling Championship was held in Rio Grande do Sul. Representatives from two other cities participated in this event:  Rio de Janeiro and São Paulo. It was a landmark occasion, firstly because it appears to be the true beginning of the organization of Olympic Wrestling in Brazil, and secondly, because it brought together the best fighters of the era, most of them from the Catch-as-Catch-Can Style/Luta Livre but also Judokas. According to newspaper reports, the Olympic Freestyle of Wrestling was completely unknown in Brazil until this time. The event was especially organized with the aim of scouting future athletes for participation as Brazilian wrestlers in the Olympic Games. The Olympic committee of Brazil did not officially approve athletes of the wrestling discipline to participate in the London Olympics of 1948 for the simple reason that up to this time no official organized tournaments within Olympic Wrestling Style were held in Brazil.

The tournament in 1949 was a great success, having hosted more than 10,000 spectators and offering a large number of exciting fights. Particularly of note was the innumerable referee interventions that occurred during the fights. The reason for this phenomena was the fact that most of the fighters were Luta Livre/Catch stylists and as usual for them; they applied chokes and joint locks which are prohibited in the Olympic Style of Wrestling. It seems as though the rules were not clear to this group of athletes.

Rio Grande do Sul, São Paulo and especially Rio de Janeiro were key areas in which people worked on the development of the Olympic Freestyle of Wrestling. In the old capital of the country, the pioneer work of Mestre Tatu’s students are worthy of mention. Most importantly, the Olympic Wrestling Team of “Clube de Regatas do Flamengo” which all initially came from Luta Livre/Catch Style. The Team of “Clube de Regata do Flamengo” was considered to be the best Brazilian Olympic Wrestling Team of that time. Its level of performance was seen to be quite higher than other Teams in the country. This fact was emphasized by the achievement of the first medal (silver) ever won in this discipline at the Pan-American games in 1951. With the growing success of the new style, many fighters started to train according to the Olympic rules with the hope of representing Brazil in future Olympic Games events.

A large majority of these fighters had a strong connection to Mestre Tatú as most of them were trained and instructed by him. Some of these fighters managed to become champions of different styles like Olympic Wrestling and Luta Livre/Catch in parallel. The Team of “Clube de Regatas do Flamengo” included names like Hugo Melo, Rene Bastos, Antenor da Silva (Baianinho), Jose Cardoso (Kid), Raimundo Piragibe and Adalgildo Morais (Moraizinho).

MORAIZINHO:  He was the oldest in the team. He had trained with Mestre Tatu in the early 40s in Rio Grande do Sul and fought twice against George Gracie. In Rio de Janeiro he managed to become the best trainer of Olympic Wrestling in Brazil during that era and he also fought many Vale Tudo fights before he started with his career as a trainer in Flamengo Club.

RENE BASTOS: He started his fighting career under the guidance of Orlando Americo da Silva alias “Dudú”. Later and after moving to the capital he was trained and instructed by Mestre Tatú. He fought many Vale Tudo fights including matches against representatives of the Academy of the Gracies. Rene Bastos also fought Waldemar Santana two times, both fights ending in a draw.

HUGO MELO: Melo started to train with Mestre Tatu in the mid-1940s. He also focused on weight lifting, a training method which was introduced by him later in the Judo Academy of Cordeiro. He fought under Luta Livre/Catch, Vale Tudo and Olympic Wrestling rules and during sometime in the 50s he transitioned to Judo. He managed to become a champion multiple times in this discipline.

RAIMUNDO PIRAGIBE: He was a strong fighter of Flamengo’s Olympic Wrestling team and fought under different rules. Due to his high level of technical performance he was nominated to occupy a place on the team for the Olympic Games, however it seems as political reasons created a series of barriers to this and Olympic Wrestling was not represented by Brazil.

ANTENOR SILVA: Also known as “Baianinho”, originally from Bahia, moved to Rio de Janeiro with the hope of meeting good trainers to improve his abilities as a fighter. Under the direction of Mestre Tatu he was able to develop his skills allowing him to become Brazilian champion. He fought many amateur Luta Livre and Vale Tudo fights, but his greatest achievement was to secure the silver medal in Olympic Style Wrestling at the Pan-American Games of 1951 in Buenos Aires, Argentina. He narrowly lost against the local champion at the finals, however was victorious over the American champion. With this performance he became the first international Brazilian medalist in Olympic Wrestling.

With these results it should be testified that Antenor Silva, a former disciple of Mestre Tatu, was the very first Brazilian to win an international medal within the Olympic Wrestling Style in 1951 in Argentina. Therefore, Euclydes “Tatu” Hatem should also be considered one of the pioneers and central figures for the development of the Olympic Style of Wrestling in Brazil.