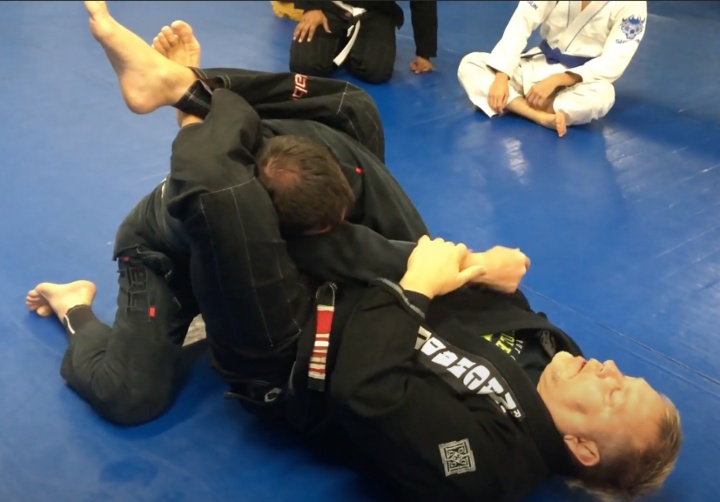 Do you „play“ the Crooked Guard game often? No? Well, you probably have a lot more opportunities for using it than you think… And for utilizing it to your advantage with the LOAD of submissions it offers!
Here’s why you should use the Crooked Guard more, as well as a number of attack options as demonstrated by Erik Paulson.

THERE’S MORE TO BJJ THAN THE BASICS

In the beginning of your BJJ journey, it’s a given that you should focus on your basics more than anything else. You need to get a sense of how Jiu-Jitsu works, learn the basic movements, positions, and submissions… Before you can start experimenting and finding your own style.
However, it isn’t good to stay „glued“ to the basics either. After some time, you should begin trying out different things.

There’s a lot more to Brazilian Jiu-Jitsu than the basic Mount, Butterfly Guard, both-hooks-in on the back… And so on. You can upgrade to a multitude of variations of these positions, and find heaps of submission options from there.

Such is the thing with the Closed Guard. There are a lot of variations to it, and one of them is the Crooked Guard.
Now, the thing is that Crooked Guard isn’t some fabulous guard that you’ll have a lot of difficulties setting up. In fact, you’ll be able to set it up every time your opponent has one arm away from your torso! Just elevate your legs so that one is cupping the opponent’s shoulder – and you’re ripe for setting up submissions!

However, one word of advice before you take a look into the various attacks from this position.

DON’T MINDLESSLY STICK TO ONE SUBMISSION

A lot of Jiujiteiros (especially beginners) have a problem when it comes to using a submission in a roll. No, this problem isn’t about using the submission properly or not, nor is it about being able to do a lot of techniques. Instead, the issue is when the Jiujiteiro goes for a submission and then tries to finish it by all means necessary.

Of course, you won’t be able to get the tap immediately every time. A lot of times, you’ll need to make adjustments so as to force your opponent into tapping out. However, if you see that you just can’t finish the submission – or if the opponent defends against it well – be ready to move on to another one!
Don’t stay so attached to the technique you went for initially, that you miss out on the opportunities that the opponent’s defense offers. Be willing to transition to another submission (or position even), so that you remain active in the hunt for the tap.

With that said, here are a number of submission opportunities from Crooked Guard by Erik Paulson.

The first submission that you can go from the Crooked Guard is the Armbar. However, if the opponent pulls out his arm, then you can attack the other one (the one which was outside your torso) with the Inverted Armbar! Also, you can be really sneaky and go for the Wristlock as well.
If the opponent turns his arm up, Erik Paulson shows that you can go for a V-Arm Lock, a Kimura… Or – the old faithful – the Omoplata!

Also, pay attention to how Erik crosses his legs in Crooked Guard. You should lock them so that the leg which covers the opponent’s shoulder is on the bottom.
This will make it tougher for your opponent to punch his shoulder out of your Crooked Guard.

Watch the video below for more details on these setups: