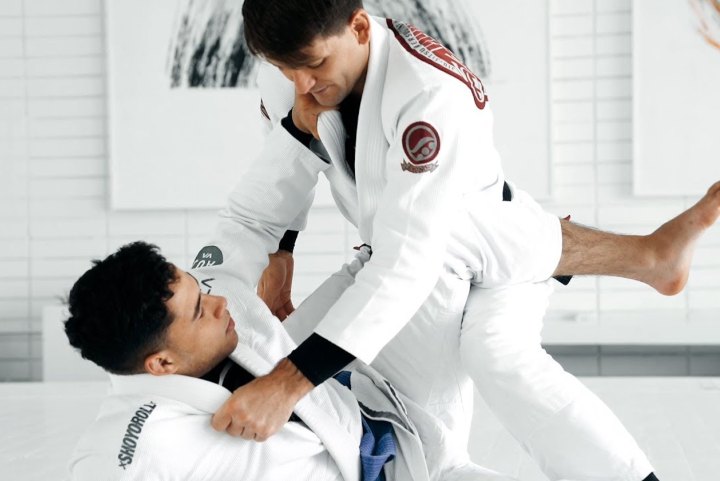 There is so much advice on defending from bad positions! And, the thing is, so much of it differentiates from one situation to another; which comes to question if learning how to defend (and attack!) should be done as it’s usually done – in a straight line, one defense at a time. That is, couldn’t it be that there are some things you can go forward with no matter the impending danger?
Well, there actually are! Priit Mihkelson gives his advice on defending against the Leg Drag which you can use for defending from a lot of other passes.

The concept Priit plays around most with – and possibly the most important one – is that of least possible danger. He proposes that even if you do end up in a bad position, but don’t know what to do, it’s better to do nothing… As it could lead to an even worse situation!
A great example for this comes exactly from the Leg Drag scenario. Your opponent has managed to Leg Drag you – and you freak out, opening the arms out. What’ll happen, instead of your opponent simply passing to the side, is that they’ll get underhooks and/or start applying a submission hold immediately.

The advice is, therefore, to stay calm and do „nothing“. This doesn’t mean that you’re going to simply lay on the mats, but that you’ll keep your elbows close to your body. That way, once the opponent goes to pass, you’ll be able to minimize the danger you’re exposing yourself to; thus maximizing the chances of your successful escape afterwards.
Also, Priit makes an emphasis on gaining wrist control whenever you can. Generally, whoever controls the wrist, controls the game. Additionally, keep an eye on your opponent pulling their arm up (you can force them to do this by controlling their wrist); this is your cue to go for an escape.

Play around with these pointers: keeping your elbows close, establishing wrist control when you can, and looking out for openings that’ll grant you an escape.

The second piece of advice Priit shares is that you should never allow yourself to get flattened out! This’s the absolute worst position to be in, one where your opponent can wreck you the most.
In the Leg Drag example, this is shown when your opponent starts pulling you from the back, trying to flatten you out. Don’t allow them to do this! Even at the cost of exposing your back; which, as Priit says, isn’t necessarily bad – it depends on the situation you’re in… But, for now, just start playing with the concept of not getting flattened out by keeping the shoulder closest to the opponent off the mat.

What you’ll notice is that they will commit by pulling way too hard; you can take advantage of this by going into them, ultimately retaining your guard in the process!

And finally, Priit explains that you should understand that escaping from a bad position immediately will rarely ever happen. So, you need to mix the possibilities for escape in a strategic way; make the opponent think that you’re going for one thing, and then when you’ve provoked a reaction – go for another escape entirely!
The best way to look at this is to alternate between going for a Sitout, Turtle and Guard Retention. By learning how to juggle between these three, you’ll understand how one makes the opponent react and makes them susceptible for the second escape.

Watch Priit Mihkelson explain these pieces of advice in more detail below: