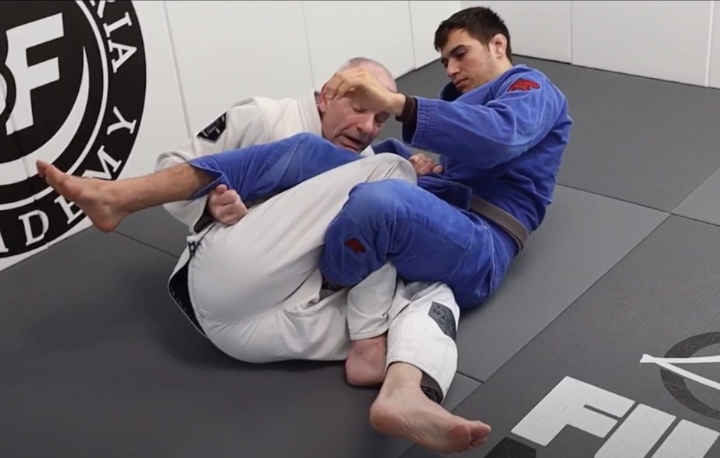 In the sport of Brazilian Jiu Jitsu, there are a lot of things you can do that will take your opponent by surprise – like doing a technique that they don’t expect, or that they haven’t even seen or experienced beforehand! One of those techniques is the Bear Trap.
Daniel McCarthy shows how you can use the Bear Trap to neutralize your opponent’s De La Riva guard, as well as how to set it up when you play your Butterfly Guard game.

First of all, professor McCarthy points out that when encountering a De La Riva guard, most people respond to it correctly: they push their opponent’s leg towards the floor, so as to free their hooked leg.

This is a great first step. Once you do it, you need to make a long step back… But, pay attention! When you do this, your opponents will likely try to set up something themselves, like a Berimbolo. So, in order to counter that, you need to step in close to your other leg, thus trapping your opponent’s leg in place.
From there, you need to grab your opponent’s thigh. Grab it as high as you can (if you can reach for it, grab their belt), almost as if you were doing an Over Under Pass.

Professor McCarthy then demonstrates that you need to sit down. As you do that, put pressure on your opponent’s knee by shifting your own knee into the direction opposite to them, and you’ll notice that you have their leg stuck in a Bear Trap!

To finish your Bear Trap setup, you have two options: to set up a pass to Side Control, or a Calf Slicer.

In both cases, you’ll start by hugging their leg and by opening their lapel. Take a hold of the lapel with both of your hands and pull yourself with it, in order to climb yourself higher on their leg. Your opponent is completely stuck now and may try to free up their leg. As soon as they do that, reach for their leg, pull it over your head and into your lap; all the while having a grip on their pants. Then, stay tight to that leg by clamping your chin on it.

From there, professor McCarthy grabs his training partner’s Gi at the hip and posts on his other hand, shifting himself in order to get a position for passing the guard – which he does by unlocking his legs and going to Side Control.
The alternative Calf Slicer technique is done by reaching for your opponent’s other hip and then by driving their trapped leg’s heel with your hip, towards their tailbone.

On the flipside, when setting up the Bear Trap from the Butterfly Guard, professor McCarthy shows that he doesn’t play the „traditional“ Butterfly Guard with both feet in; one of his feet goes to the outside and squeezes on his training partner’s knee in unison with the other foot.

Once having established the underhook, as well as a grip on the belt, professor pulls his training partner while turning his elbow and arm up into the partner’s armpit, tilting him to the side. Then, he gets underneath him.
From there, he takes his training partner’s foot and pulls it into his hip, locking the Bear Trap afterwards. Finally, he tilts him to the floor in order to go forward with setting up his pass.