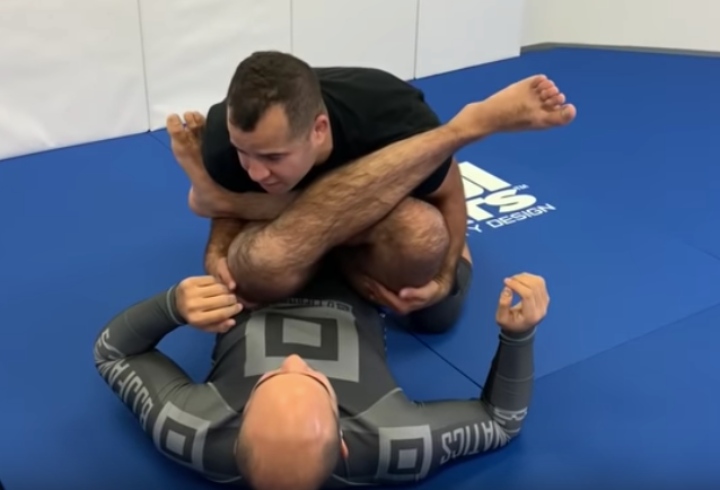 Passing with speed, explosiveness and by continuously changing directions is highly effective (and cool, let’s not kid ourselves). But, what if you aren’t that fast and explosive to begin with? Or, what if you’re just like the legendary Leo Vieira, who was once famous for his style of passing guards with speed, but now – because he’s 44 years old – has had to adapt his BJJ game towards a more steady direction?

Leo demonstrates a great approach to passing in No Gi that he had developed precisely because of that: the 50/50 with using the arms!

Leo starts off by saying that he noticed that the „usual“ 50/50 was a very good position for the person on bottom, since it incapacitated the person on top to stack, to pass… To impose their game pretty much. So, he figured – what would happen if he, as a top position player, were to establish the 50/50 position by using the arms instead?
Through experimentation, Leo understood that he could use this position to get his opponent stuck and incapacitate him from retrieving his guard easily, as well as that he can use it to forward towards dominant positions.

But, how can you get to this 50/50 with arms position in the first place? Leo shows an approach from the Butterfly Guard.

When Bernardo Faria, Leo’s training partner, sets a Butterfly Guard, Leo starts setting up his 50/50 with arms by first establishing ankle and knee control on Bernardo’s leg. After that, he steps back with his own leg, creating space between himself and Bernardo.

Then, he uses the hand which was on the ankle to go underneath Bernardo’s leg. While keeping the knee stuck to the mat with his other hand, he elevates Bernardo’s leg from underneath, forcing him to lay down.
Leo shifts his knee grip to an upper thigh one and his other hand gets control over the knee. Both of his elbows stay tucked in throughout the process.

WHAT THEN? WAIT FOR THE REACTION.

This is now a comfortable position for Leo, where he’s controlling Bernardo but also where he’s not vulnerable to being attacked. He just needs to wait for a reaction. For example, if Bernardo tries to shrimp away, Leo’s simply going to pass to the side where he has the leg control.

If Bernardo brings his leg over in order to retrieve his guard, then Leo will first establish ankle control with one arm, and use the other one to grab Bernardo’s other leg. From there, he is going to switch the first grip to the thigh of Bernardo’s leg, post to his feet and stack Bernardo, getting to his side and forcing him to go for the leg – which makes it possible for Leo to get the North South position pretty easily!

Leo explains that the 50/50 with arms position is a great one for him nowadays, for the simple reason that he’s a bit older and because this position doesn’t require him to move all too much.
He says that, sure, he was well-known back in the day for being an athlete that passes guards with speed, but that was when he was faster than a lot of his opponents were, which he then used to his advantage. But, as he’s 44 years old now, he understands that he isn’t the fastest one anymore and that he’ll have to slow his opponents down – thus utilizing the 50/50 with arms position.

Watch Leo Vieira explain this position in more detail on the video below: