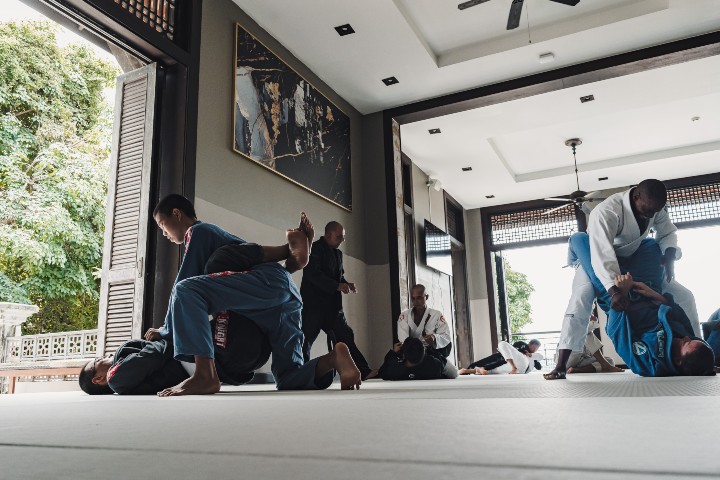 One of the best ways to learn anything is to completely immerse yourself in it, whether it’s learning a language, a musical instrument, or martial arts. The jiu-jitsu journey is a personal one, and everyone has their own path to walk, molded by their age, their work life, their location, and more.

It doesn’t matter if it’s a 41-year-old neurosurgeon with little time outside of work, or if it’s a 16-year-old who has nothing but – the immersive experience of the White to Blue Belt Course at the Temple BJJ Academy in Phuket, Thailand takes all of this into consideration. While a belt is not guaranteed, massive improvements in mind, body, and skills are for those who choose to go through the training regiment set up by 5th degree Black Belt Olavo Abreu.

“It’s just a name, nobody is going to get a blue belt coming here if they’ve never done jiu-jitsu in their life. The goal of this is for the commitment. Some people need the commitment,” said Abreu, a longtime Carlson Gracie Black Belt.

The course is a 3-month regime: 2 classes a day (including privates), 5 days a week, for a total of 156 BJJ classes with Abreu. It’s meant for anyone who is a white belt, although people who began their training and then had to stop due to kids, accidents, injuries, a move to another city, etc, (A.K.A. life), these people may have a shot at earning a blue belt, depending on their skill level and how quickly they can pick things up.

“This fits a lot of people. Let’s call them ‘ronin jiu-jitsu guys’ that maybe work somewhere where there’s no jiu-jitsu, but been training 3-4 years on and off, and wants to step up to blue belt. They may come here to train for 3 months, he might have the chance to get a blue belt. But the goal is not to give anyone a blue belt. It’s just a name,” he says.

In all the years of the program, Abreu only recalls 1 participant who went from zero knowledge as a white belt, entered the course, and earned a blue belt – an exception, rather than the rule. While those outliers do exist, the program is a tool for people to maximize their mat time, learn about themselves, and develop basic skills that will serve them for the rest of their BJJ journey.

“[One guy] Never trained before and I gave him his blue belt, but that’s because he….. brother, he was talented, he tapped blue belts in the gym, so I gave him his blue belt. Jiu-jitsu is like this, everybody is different. Some guys are talented and they do stuff that nobody can do. But the criticism is good, I don’t feel offended, you can talk whatever, and if it’s a good criticism, I try to change the approach for that so it’s all good,” Abreu says.

The White to Blue Belt program began at Phuket Top Team, Abreu’s previous BJJ home, where he plied his trade for nearly a decade prior to the Covid pandemic.

Abreu himself admits that he was skeptical about the course when it was first proposed, but after seeing how the students responded to the course – having committed to the classes, improved their skills, and got in better shape –  he was convinced.

While many people who first start the course are excited about the prospects of advancing to their blue belt, Abreu makes it clear that this is not a guarantee.

“The first time I talk to them I really make sure that they understand that the belt is not 100% there. The belt is something really important for us, and what I explain to them is to enjoy the process: trust us, if you don’t get a blue belt, I guarantee you’re going to learn jiu-jitsu. You’re going to be good in the basics. Because I think today, there’s a lot of lack of the basics in BJJ.”

Over the years, the White to Blue Belt course has had success stories, and by Abreu’s own account some 30% of participants have earned their blue belts at the end of the program. But the goal is to create accountability for those who have had a hard time committing to the jiu-jitsu journey and to learn, improve, and understand what’s asked of you as a blue belt.

“I don’t just give out belts, I come from Carlson Gracie. To give somebody a belt, the guy has to deserve it. A blue belt, for some people, it’s as important as a black belt. Something like 90% of people stop as a blue belt. So it’s a great achievement in life. We’re not here to sell belts, we’re here to change your life,” he says.