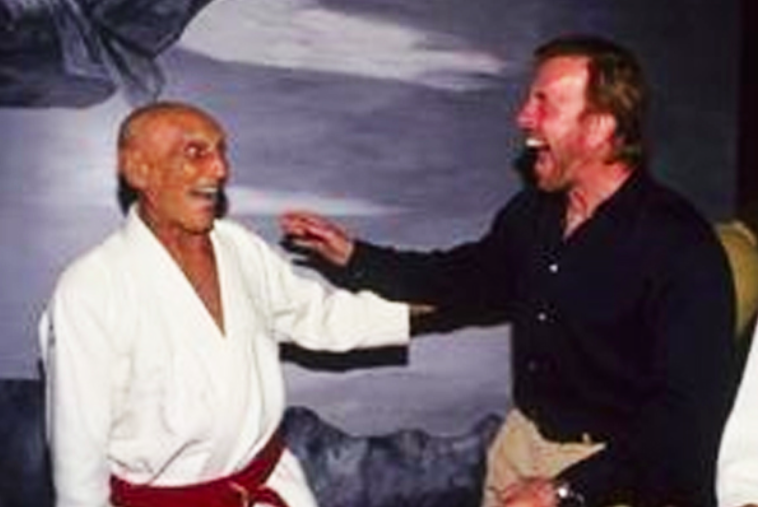 In this segment Chuck tells the tale of his first meeting with the legendary Gracie family while in Rio de Janeiro many years ago. Chuck grappled with brothers Royce Gracie and Rickson Gracie and their father Helio Gracie and his description of getting tapped out by each of them is hilarious. Especially when the elderly Helio has to apologize to Chuck after choking him out.

“When I started in Jiu-Jitsu, I was in Rio de Janeiro on vacation and was going around to all the different martial arts schools and working out. And at every school I went to, the name Gracie Jiu-Jitsu kept popping up. So I said, ‘I’ve got to find out who they are.’

“So I tracked them down in Rio, and I went to their school. And I met Mr Gracie, the father. I met Rickson Gracie, who was the world champion at that time, and Royce Gracie.

“So I asked if I could work out with them. And they said–very cordial–, ‘Of course.’ And I was a black belt in judo, so I thought I had some pretty good grappling skills. Anyway, I got on the ground with Rickson Gracie, and it was like I’d never had a lesson in my life. He played with me. And then I went and worked out with Royce for a while. And then Mr Gracie said, ‘Chuck, let’s you and I grapple.’

“Mr Gracie’s about this big [gesturing that he is short with his hand]. So we started working out, and I mounted him. And he says, ‘Okay, Chuck, punch me.’ And I said, ‘Mr Gracie, I’m not going to punch you.’ And he said, ‘No, no, no. Punch me.’ So I brought my hand back [to punch him], and that’s the last thing I remember.

“The next thing I know, I’m waking up. I’d been choked so hard I could hardly swallow. He said, ‘I’m sorry. I didn’t mean to do it so hard.’ Then he says, ‘I want you to stay here. You’ve got great potential. I can make you a great Jiu-Jitsu person.’

“Unfortunately, I was getting ready to do a movie and couldn’t stay there. But I went back to LA and started training with Rorion Gracie, who had a school in Los Angeles. And I started training with the Machado brothers, who are the cousins of the Gracies, and I’ve been with them now for 28 years.”

In this video from http://BloodyElbow.com, action movie star Chuck Norris talks about the trip to Brazil where he first trained with Helio, Rickson and Rorion Gracie.