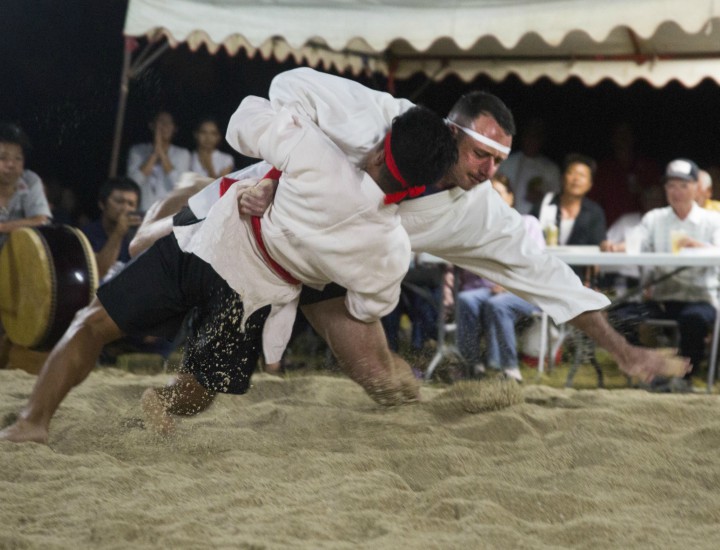 Guest post by Brandon Hetzler  who is a Gracie Jiu-Jitsu black bet under Rickson & Kron Gracie, and creator of Jugoshin Ryu JuJutsu.

It is believed by many masters that tegumi was probably the original form of fighting in Okinawa. Tegumi along with the striking and kicking techniques imported from China, were forerunners of the art that eventually became known as karate.

“Tegumi was a rough and tumble bout where the winner was decided by submission, through joint locks, strangles or pinning.”

To adequately defend yourself in a real fight you will need a knowledge of all the various ranges of combat. In a single discipline sporting contest there is no need for skills at every range. For example, a boxer does not need to know how to kick in order to win his bouts, nor will a judoka need a knowledge of punching. However, in a real fight the opponent will not “play by the rules” and if you should find yourself in an uncomfortable position there will be no referee to interject and to restart the bout at a range where the combatants know what they are doing! As Geoff Thompson once said, “You can be a 10th Dan on your feet, and a white-belt on your back.” 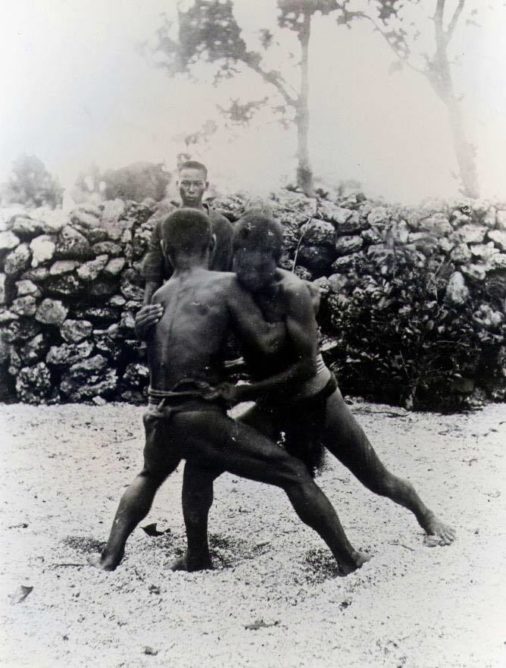 Gichin Funakoshi Sensei also makes reference to grappling techniques in “Karate-Do Kyohan”. Funakoshi wrote, “…in Karate, hitting, thrusting, and kicking are not the only methods, throwing techniques and pressure against joints are included.”

What happened to Tegumi in Karate?

Before 1900, karate placed just as much emphasis on the Tegumi elements of the art as it did upon the striking. Karate training would include throws, joint-locks, chokes, strangles, grips, counters etc.

At around 1905, when karate underwent many changes so it would be suitable for the physical education for Okinawa’s school children. The dangerous techniques (tegumi) were removed and many aspects of Tegumi were abandoned. It is mainly because of this “watering down” of karate that grappling is no longer a common sight in most karate dojos today. However, if you want to practice karate as a complete system of fighting, you must include Tegumi in your practice.
.

To be an effective fighter it is imperative that you have a knowledge of all ranges of fighting like the masters before us. Hence, it is vital that Tegumi forms part of your practice, just as it did for the masters of the past who formulated karate.

My recommendation would be to train some form of grappling art such as Gracie Jiujitsu, Sambo, Catch Wrestling or Judo to add to your Karate. Instead of trying to piece together what once was, why not seek out a legit grappling art and bring Karate back to its original intention. I know many high level Karate masters of today who have done just that. Patrick Mccarthy Sensei, Paul Enfield Sensei and Ron Van Clief just to name a few, have all trained in Brazilian jiu-jitsu to better their Karate and to help bring it back to its original form.

Grappling is very in depth and I truly believe that you can’t just try and piece it together. I have had many high level Karate Sensei visit my Dojo. They will train, get submitted and then tell me that they have that technique in their kata. Having it in your kata and being able to actually do it “live” are two completely different things. Imagine the doors that would open in your kata if you learned a legit grappling art?
Grappling made me understand Karate better than I ever did just like striking would help a grappler.

I guess the point of this extremely long post is make sure that you are a well rounded martial artist that can fight at any range.