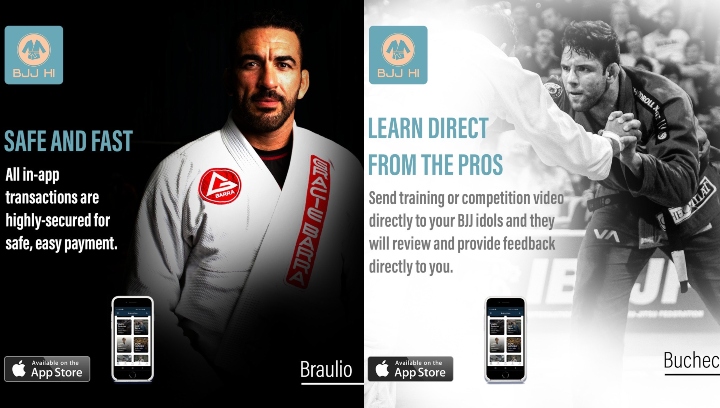 Imagine learning BJJ from the legends themselves… From Renzo Gracie, Buchecha, Felipe Pena, Braulio Estima – just how awesome would that be? Now, imagine that you didn’t have to travel half of the world to learn from them; but that you could get coaching right now. If this were possible, your Jiu Jitsu would skyrocket!
Well, it is possible! The „BJJ HI“ app helps you get in touch with the best athletes of our sport worldwide, and to receive coaching from them – whenever you want to.

WHY LEARN FROM THE BEST?

All of that sounds cool, but the question is: why should you learn from the best in the world? Aren’t you improving already, just by training regularly?

Sure, you can become really good in BJJ if you just do what you’re supposed to be doing anyway. Show up as often as you can and don’t allow excuses to take away your mat time. Drill techniques with focus and seriousness, by trying to make each repetition more technically sound than the previous one. And when you drill, make it a point that you’re going for moves with intent; that you aren’t doing things randomly.

However, if you want to become extremely good at something – excellent, even – then getting insights from professionals, from people who are experts, would make you improve at a much faster rate, with much more quality than before.
In other words: expert insight is vital for those who want to achieve greatness. And the same is true for BJJ. 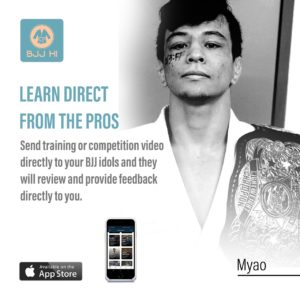 SO WHY SHOULD I USE THE „BJJ HI“ APP FOR THIS?

With that in mind, you may be asking: „Okay, but why should I use the ‘BJJ HI’ app for this? What does it do, anyway?“

Essentially, it’s an iPhone and Android application that enables you to learn Brazilian Jiu Jitsu from the best athletes and coaches in the world – by asking them questions, to which you’ll get a personalized answer!
Whichever troubles you’re having with your Jiu Jitsu, you can record them (like a technique, for example) and send them to Renzo Gracie, Buchecha or others. Then, wait a bit – and they’ll answer you right back, with a solution to your problem.

Plus, you’re going to be right on the mats with them! You will watch live seminars from the best Jiujiteiros in the world – wherever you have an Internet connection.
Doesn’t that sound cool? To sit on the mats with your training partners, hanging out and watching legends demonstrate techniques for you?

And let’s not forget that you’ll have access to their numerous technique demonstrations… Just pick from who you want to learn a specific technique, and start learning and drilling it!

SOUNDS GREAT, BUT IS IT SAFE?

If something sounds too good to be true, it most often is… But that’s not the case with BJJ HI!

The person behind the app is one of the most influential people in Jiu Jitsu, Augusto Frota. Being the founder of one of Europe’s most prestigious, world-class BJJ academies – the Frota Academy – Augusto is well-known both as a brilliant coach and insightful businessperson; who uses his knowledge of Brazilian Jiu Jitsu and its top-ranking athletes to benefit as many people’s BJJ journey as possible.
The BJJ HI app is, in this way, a continuation of this „better for everyone“ goal. And it’s fantastic to know that those same people who created an app of value such as this, are as much in love with the Gentle Art as you are.

Go ahead, give BJJ HI a shot. We promise you that you’ll love it, check it out here: https://bjj-hi.com/