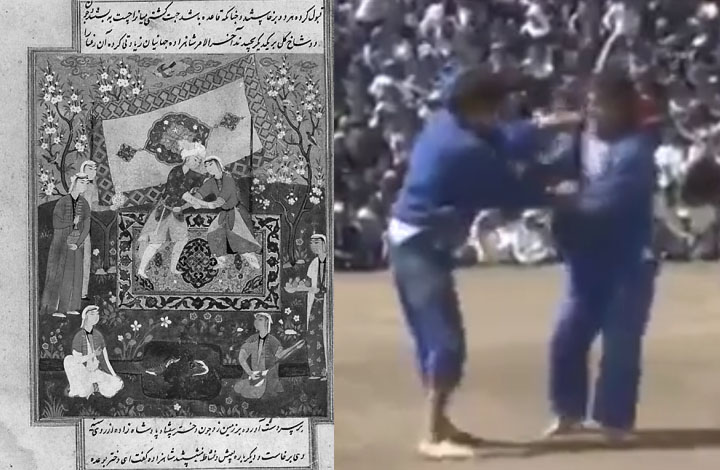 Tajikistan takes it’s wrestling seriously! Check out this video of a match somewhere in Tajikistan where a woman could be going against a man and the throws never stop.

Tajikistan is a mountainous, landlocked country bordering with China, Uzbekistan, Afghanistan, Kyrgyzstan and Pakistan. It’s been a part of many empires notably the Mongol Empire and the Russian Empire/Soviet Union. Following the collapse of the Soviet Union in 1991 Tajikistan declared independence. 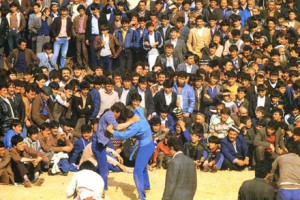 The national sport of Tajikistan is gushtigiri, a form of traditional wrestling. It’s distinct for its colorful tradition. When the towns were divided into mahallas (districts) each district had its own alufta who was the best wrestler. The position usually went to an upright and respected individual but was often challenged by those of lower rank. 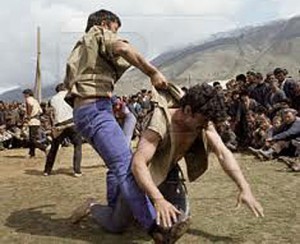 Notably 3 citizens of Tajikistan have won Olympic medals (since declaring independence) and all of them in combat disciplines: wrestling, judo and boxing.

In this book the author while mentioning about the benefit of traditional martial arts, he describes two types of local wrestling :

1. Two men grab each otherʼs belt and pulled another. And each man tries to free himself from the opponentʼ s grab.

2. Two men shake hands with two hands with each other, pass through the right hand under the opponentʼs left hand and pull to oneself and try to turn down an opponent.

The archaeologists have proven that wrestling was very popular among the Sogdians and Bactrians – ancestors of Tajiks! 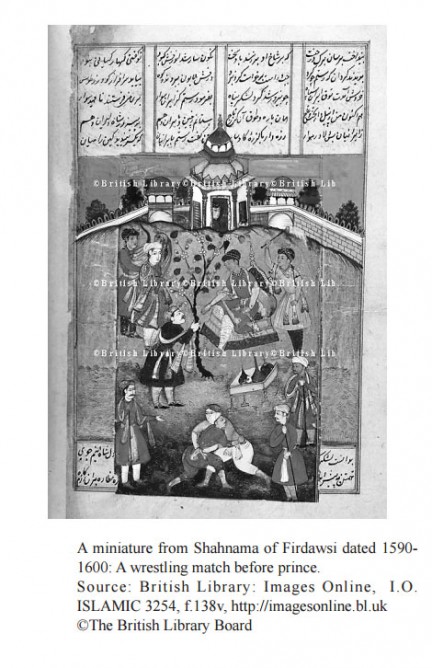 In Tajikistan, during the national New Year Navruz, every village, community, town and city organize a new year open wrestling competition. Men of any profession (not only wrestlers) try and join the competition. According to traditions, children begin the competition, then youngsters continue and after them, the notable wrestlers compete with each other. If somebody is defeated in a village Navruzi wrestling competition, his brother competes with the same opponent to save the familyʼs pride.

Wrestling is an integral part of the culture of Tajik people. It was customary that when a family visits their relatives or friendʼs house and if there is a boy in the host family, who is almost the same age with their son, they ask their son “Please wrestle with their son. Letʼs check, who is stronger”. The distinction between Wrestle and Fight should be noted. The father would always say wrestle.

In Tajiki wrestling, the pahlavons (wrestlers) should wear the national coat and short pants and fasten a light belt around their waists. A pahlavon (wrestler) may grab and hold his opponentʼs belt, sleeve or collar of jacket or coat. Clench below the waist is not allowed. However, the sprints through legs are allowed. The winner is the one, who throws an opponent back down first.