Tabata Intervals – The Most Efficient Cardio for Combat Sports 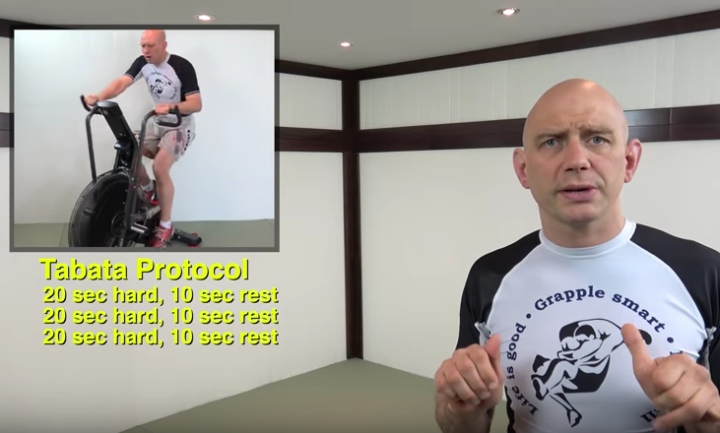 In popular culture, “Tabata training” has now come to refer to a wide variety of HIIT protocols and exercise regimens that may or may not have similar benefits to those found in Tabata’s original study.

A version of HIIT was based on a 1996 study by Professor Izumi Tabata et al. initially involving Olympic speedskaters. The study used 20 seconds of ultra-intense exercise (at an intensity of about 170% of VO2max) followed by 10 seconds of rest, repeated continuously for 4 minutes (8 cycles). The exercise was performed on a mechanically braked cycle ergometer. Tabata called this the IE1 protocol. In the original study, athletes using this method trained 4 times per week, plus another day of steady-state training, and obtained gains similar to a group of athletes who did steady state training (70% VO2max) 5 times per week. The steady state group had a higher VO2max at the end (from 52 to 57 mL/(kg•min)), but the Tabata group had started lower and gained more overall (from 48 to 55 mL/(kg•min)). Also, only the Tabata group had gained anaerobic capacity benefits. It is important to note that in the original study from 1996, participants were disqualified if they could not keep a steady cycling pace of 85RPM for the full 20 seconds of work.

Tabata interval workouts are one of the most efficient ways to improve your cardio if time is really limited. Here Stephen Kesting talks about doing cardio on a tight schedule, plus go through a difficult Tabata workout on an Airdyne bike for you.