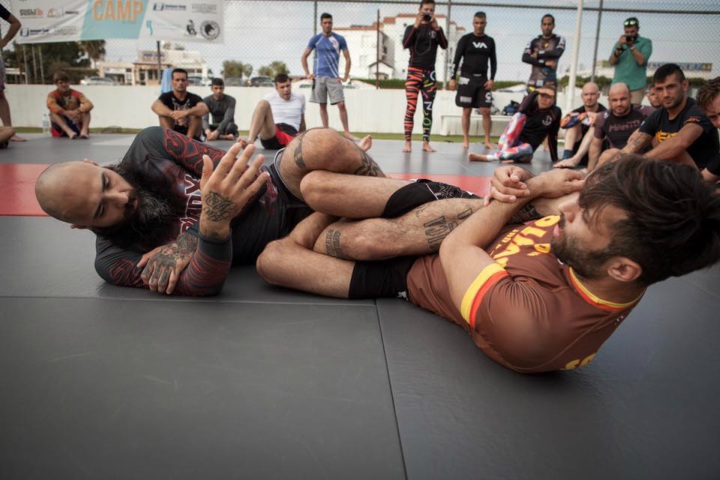 The BJJ & Beach Camp is a top class seminar that combines world class jiu-jitsu instructors with the excellent weather and beaches of the Mediterranean in a package deal that makes it possible to put it all together at a fraction of the cost.
26 August – 2 September 2017 Protaras, Cyprus.

The idea of the camp is simple – to combine high level jiu jitsu training with holidays in the beautiful Mediterranean island of Cyprus. You’ll get the chance to train with 10th Planet black belts Richie and Geo Martinez. They’ll share their unique approach to the sport and you’ll learn new techniques while preparing for the next season.

Athletes from all over the world will join the camp, creating an opportunity for an exchange of techniques and styles of play.

To find out more:
http://bjjandbeachcamp.bigcartel.com

Geo “Freakahzoid” Martinez is one of Eddie Bravo’s 10th Planet black belts. He made his name as an undefeated competitor throughout 2014 in the Adult Black Belt division of the Gracie Nationals, ADCC Trials and went on to beat the World Champion, Jeff Glover at the Eddie Bravo Invitational finals. Currently Geo is the EBI 10 Bantamweight champion. Geo’s natural talent and background in breakdancing gave him the edge in developing a fighting style which is undeniably unique and dangerous. His strength, flexibility and spacial awareness give him the ability to teach students his unique concepts to adapt and assimilate into their game.

Richie “Boogeyman” Martinez is a 10th planet black belt and current Tuff-N-Uff 170-pound Champion. He is a decorated medalist in some of the most prestigious grappling events such as IBJJF Worlds NO-GI, Gracie Worlds, United Grappling Federation (UGF), North American Grappling Association (NAGA) and others. His success on the mat and in the cage is attributed to his endless work ethic, strength and flexibility developed through breakdancing and refined through BJJ.