The story of First Televized MMA Match, a Judoka and a Boxer 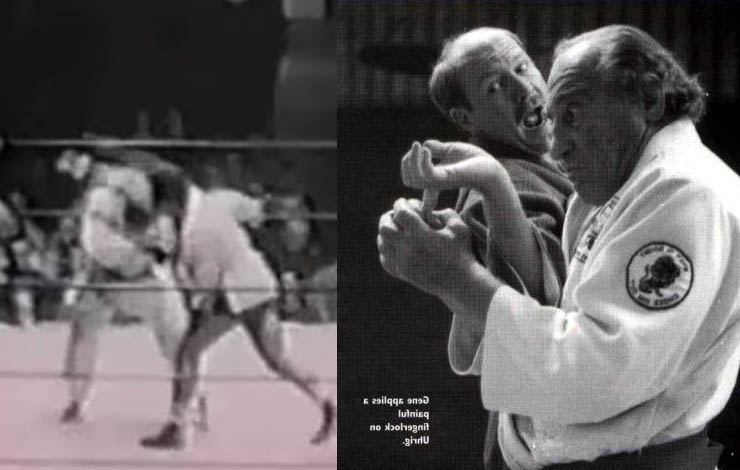 While the Gracie family had long been facing challengers the first televised Mixed Martial Arts match was actually one of Gene Lebell.

The Ronda Rousey judo mentor was pitted against boxing long before Royce Gracie first came into the octagon.

The first live broadcast dates back to 1963.

A decorated judoka, Gene Lebell was deemed a great having won the AAU National Judo Championship in 1954, 1955 and yielding first open challenge issued by a boxer Jim Beck in Rogue magazine.

The original challenge went along these lines:

to practitioners of the Japanese martial arts claiming boxing would defeat any martial art style and even offering a $1000 cash prize.

Taking the bait Gene Lebell travelled to Salt Lake City to participate in the challenge only to have a last minute opponent change to a much more accomplished boxer in Milo Savage.

Like any style vs style bout there was a kerfuffle over the ruleset with the boxer’s camp insisting Lebell could not strike with Lebell’s came returning with the stipulation that Milo had to wear a gi.

In the end Milo was wearing a much tinner gi – a Karate one and not a judoka gi. He had also reportedly lathered it up with Vaseline to bank against Gene grabbing him.

Along these speculations there was also a suspicion that Milo’s gloves contained brass knuckles?!

Regardless of the clear cheating and disadvantage, Gene Lebell was also able to close the distance getting Milo to the mat with a harai goshi, from here he was able to secure mount and sink in a rear naked choke.