Steve-O Had UFC Fighters Try to Give Him Cauliflower Ear 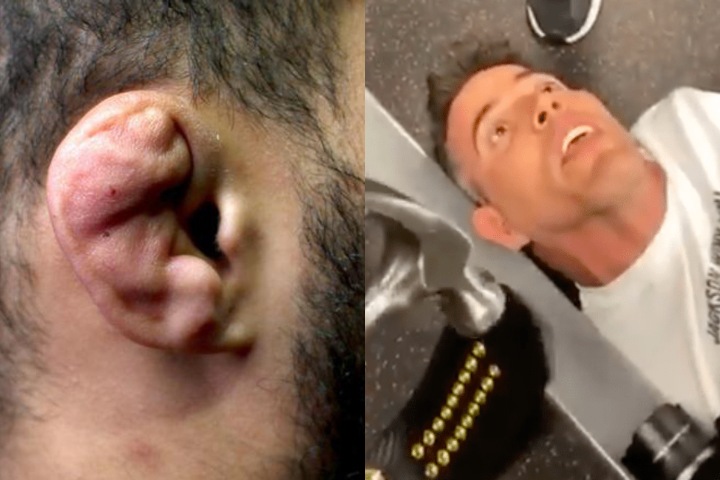 Cauliflower ear often seems like some mythical force when a white belt first falls in love with Jiu Jitsu. It’s a big problem, but it’s never really discussed in depth by professors and only really seems to be mentioned in strategy planning for competition. “If your takedowns aren’t so good and your opponent has really bad cauliflower ear, then you might want to pull guard since they probably used to wrestle.”.

Cauliflower ear is normally caused or earned (for the ones who find it cool) through many years of hard training in grappling sports. It is very noticeable so it really isn’t something that you should want to have if you are not wrestling, grappling etc…

Now why would some people want to have cauliflower ears, especially when it can be painful and even dangerous?

It’s simple, for grapplers and fighters, cauliflower ears are like a ‘badge of honour’, a trophy that makes hem look tough. People give them respect just by looking at their ears. While in most cases, it’s harmless, in some severe cases, the structure of the ear can be damaged and can negatively affect hearing and balance.

We do not recommend that anybody attempt this.

So how does one go about giving themselves cauliflower.

Your ear is vulnerable to blunt trauma.
How cauliflower ear strikes – Rough contact with the Ear
What happens – The front and back cartilage separate and fill with blood before hardening.

There are two main ways to give yourself cauliflower earss:

Rub your ear ( or ears ) repeatedly with wet cloth/material.

Repeatedly punch your ear with your fist.

In this case, some Russian wrestlers are giving each other cauliflower ears by slamming water bottle caps on their ears: