Start Catching Everyone with Ezekiel Chokes from All Angles 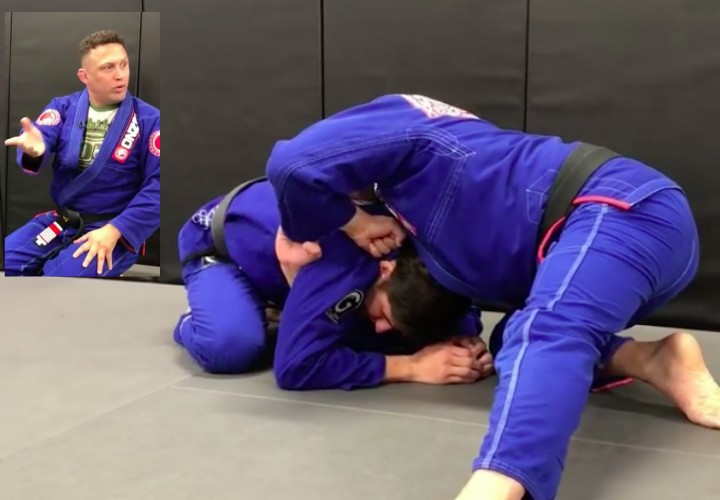 “One thing that separates Brazilian Jiu-Jitsu from other combat sports is its emphasis on technique to defeat bigger and stronger opponents. Grandmaster Helio Gracie once said that we should:

“Always assume that your opponent is going to be bigger, stronger, and faster than you; so that you learn to rely on technique, timing, and leverage rather than brute strength.”

This means that the very heart of BJJ is built upon using techniques that can beat any opponent regardless of size and strength.

No other technique exemplifies this other than using chokes to submit an opponent. To simply define, chokes are techniques that target the neck to restrict blood flow and air. In this article, we will talk about one of the most valuable chokes in all of Brazilian Jiu-Jitsu the Ezekiel Choke.

The Ezekiel choke is a technique that can be applied from many positions, top pins, and even from the bottom. It usually involves one arm behind the opponent’s head and another gripping their sleeve while locking them down with your legs, cutting off blood flow to the neck. The usage of gi sleeve makes it easier for people who do gi BJJ as it is used as a rope to make the choke tight. However, this move has been adapted for no-gi grappling as well. The no-gi version involves the same head wrapping technique, the other hand gripping the opposite forearm. An easy way of visualizing the no-gi Ezekiel is to do a rear naked choke while facing your opponent.

The great benefit of using the Ezekiel choke is that it is highly versatile and can be used to surprise your opponent. It was previously mentioned that it can be used in many positions for as long as you face your opponent’s head. It does not require any athleticism because all you need to do is secure the head and lock in the choke. This means that this is also relatively safe as there’s no positional transition required to complete the move. But do take note that this technique is highly technical, and you need good body placement to properly apply the technique. This is especially the case if your opponent is defensive.

Why Is It Called the Ezekiel Choke?

Brazilian judoka Ezequiel Paraguassu is one of the proponents of the choke in Brazilian Jiu-Jitsu. Ezequiel began using the choke (known initially as the Sode guruma jime in Judo) when he was training for the 1988 Olympics. He had a tough time opening the closed guards of his training partners, so he started attacking their necks to great success. The technique was so effective that he began to teach the choke to other practitioners in Rio de Janeiro, Brazil.

A Technique That Transcends Generations

Brazilian Jiu-Jitsu is a rapidly evolving martial art. With the explosion of leg locks and lapel-based guards, the past decade alone has elevated the art to great heights. The thing about “old reliables” like the Ezekiel choke is that it is always an excellent addition to anyone’s toolbox regardless of generation. Neck attacks will never fade into obscurity. The neck will always be a vulnerable part of the human body, and many grappling legends like Marcelo Garcia have shown how effective it is to focus on them.

How To Train The Ezekiel Choke

The best way to get accustomed to using the Ezekiel choke is to drill it with a training partner. It is critical to understand the underlying principles behind the choke. Contrary to popular belief, placing the blade of your hand towards the neck is not the whole technique! Yes, you can use the Ezekiel to crush the soft part of the neck, but that will not guarantee the tap. You must understand that the purpose of the choke is to restrict the flow of blood and air, similar to any other choke. With this in mind, you’ll be more mindful of where your body should go to apply the technique correctly.

There are also subtle differences in the gi and no-gi versions of the Ezekiel choke. You should be accustomed to using both techniques as much as you can. Also take note that the no-gi version can be harder to pull off especially when both you and your opponent are sweaty. Drill the technique from different positions and see how your training partners react. From there, you can then create submission chains based on your own game.

The Ezekiel choke is always a welcome addition to every grappler’s game. What may seem like a brute move actually carries a lot of finesse and technique. Learning the Ezekiel, especially in MMA, is highly encouraged because it is a devastating attack from the mount, especially when both fighters are tired. It is a good move to smother the opponent and keep you on the offensive, all while keeping yourself safe from threats. Whether you use the Ezekiel as a primary submission technique or as a tool to force transitions, you are sure to gain a lot from this awesome attack. Try practicing the Ezekiel choke and let us know what you think of it!