Should You Spar Against Lower Belts Or Higher Belts In BJJ? 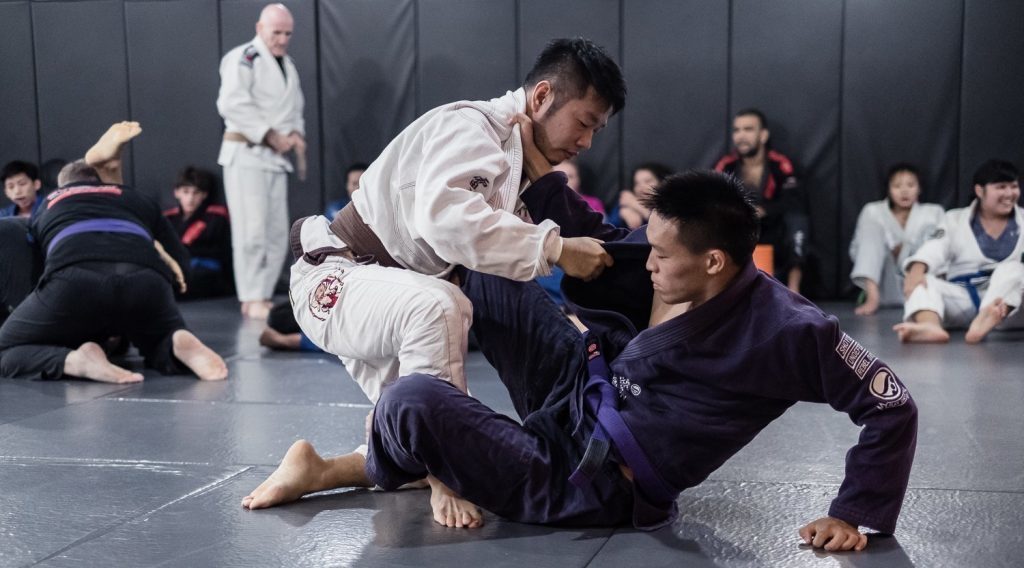 Often times, BJJ practitioners debate whether they should be sparring against higher-level belts or lower-level ones in class. The logic behind sparring with a higher-level belt is that if you train with tough and skilled partners, you too will become tough. On the other hand, sparring with lower belt partners in BJJ will allow for a person to hone their skills and tighten technique.

Testing our new techniques in your BJJ class against lower belts first is the bottom-up method.

Let’s say you are a black belt and you choose to spar with a fellow black belt or brown belt in your gym, and in your sparring sessions you are looking to test out and work on a new technique you want to add to your arsenal. Without first committing the technique to memory via drilling with equal skill level partners, as well as not perfecting the technique on lower belts, administering a submission, pass, control position, or sweep on a higher level belt may prove to be disappointing.

That higher level belt may be too experienced to be swept, or submitted, or passed, based on your rudimentary knowledge of the technique you are trying to employ on them. Were you to first perfect the technique from the bottom up versus the top down, you would probably be able to work out the kinks and nuances of the technique, thereby having the ability to attack your opponent with second or third level attacks your technique provided.

Joe Rogan explains that it is important for the blue belt to spar with a purple, brown or black belt, in order to know there is a higher level of proficiency and skill out there. At the higher level, there is a shorter distance between points, and it is important for the lower belt to see how the higher belts are capitalizing on such small openings to tap their opponent or administer that pass or sweep.

A BJJ gym is made up of people of various different levels; each person can help your journey in different ways.

In reality, you must train with everyone at every level in the gym. It’s only when perfecting your technique, should you start out with drilling with a partner, and once you are proficient with that technique, try the technique during sparring with a less-skilled person in your BJJ class, a lower belt. See that your technique works on them, and see what needs to be altered during a live sparring session, versus a drilling session. After you are able to pull off your technique one of the lower-level belts in the gym, try to administer the technique on the next higher belt, or vary the size of training partner and see what tweaks need to be made in order for the technique to still be successful.

The bottom-up approach to defense suggests you hone your defenses with lower-level partners first. Starting your defensive exploration in class with lower-level belts with minimal attacking capabilities is a good idea. After, you can start moving up the belt ranks. See whether the 50 kg purple belt can submit you while you are using your new defensive technique, then move on to the 100 kg purple. If you survived the purple belt level, keep moving up the belt ranks, on through to black belt. Before you know it, you will have impenetrable defenses. This is the bottom-up approach to defense.

In general, if you want to elevate your defensive techniques to the highest level, you must train with partners that are going to be able to tap you out. So, choosing the bottom-up or top-down approach both are equally effective. The bottom-up approach will allow you to survive longer, but it’s good practice to see whether your defense is solid with someone that will expose the holes in your defense, thus, the top-down approach cannot be ignored.