Smash Through Guards By Breaking Frames in Jiu Jitsu 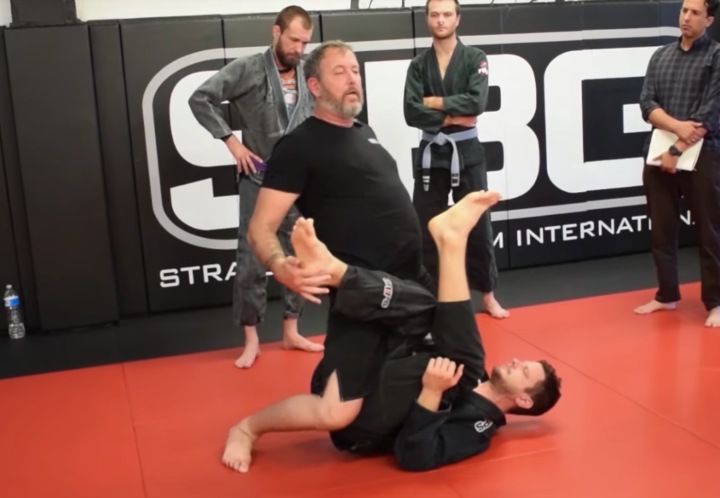 Okay, okay, we get it. Guard passing can get really frustrating, especially if you’re at the beginning of your BJJ journey… And it’s not just about the number of techniques out there, right? It’s also about your training partners, who manage to recover their guard against you seemingly every time.

Well, we have a surprise for you: there’s one principle that is fairly easy to implement and which will make a lot of difference in your guard passing game. And it doesn’t require you to be more explosive nor more technically sound – but to, simply, embrace using your bodyweight against your opponents in order to break their frames.
Matt Thornton, founder of Straight Blast Gym International, wonderfully demonstrates this principle.

GRECO-ROMAN WRESTLERS: LET’S LEARN FROM THEM

Thornton first asks his students to consider the following: what would the best „school“ of clinching be? He goes on to say that he thinks it must be the Greco-Roman wrestling, for upper body clinching is all that its practitioners do.
„But“, you might ask, „what is the value of clinching for our guard passing game?“ Great question, which Matt answers greatly: it is in the leaning in.

In other words, it is in that the Greco-Roman wrestlers don’t move their opponents around with their hands; but it is their weight that is shifted forward, leaning into the other person. This does a couple of things: it makes their own movement efficient, it forces their opponents to hold them up, and it makes them tougher to be pushed back.

WHAT TO DO? FIRST, PRACTICE STANDING.

We’ve learned that the importance of leaning into your opponent. But how to start using this to your advantage?

Thornton goes on to demonstrate that, when his training partner places a hand onto his chest, he can feel the direction his partner is pushing towards by slightly leaning into his hand.
Then, as his next step, he says that he wants to change his angle and fall forward. As he angles out and falls towards his partner, his partner’s first reaction is to block him with his elbow, which is exactly what Matt wants.

In order to understand which angle you need to change towards and fall to, Thornton suggests practicing this simple movement back and forth. There’s no „right“ angle, he goes on to say – it can be up or down, left or right. It all depends on how you feel that your training partner is distributing force through his hand, and it takes a bit of time to learn to recognize that. Practice!

THAT’S ALL THERE’S TO IT – NOW PASS THE GUARD

„Technically, this style of guard passing is all there’s to it“, Matt elaborates, as whichever of your opponent’s limbs poses a guard passing obstacle, you can pass it with more ease by using this approach.

One of the ways to seeing this approach work in guard-passing action is, he explains, through doing a simple leg drag. Firstly, commence a simple leg drag and see how many times your partner will be able to recover until you manage to pass guard. Chances are that it’s going to take a while, says Thornton.

But, what if you move your feet and lean towards your training partner a bit, and then perform a leg drag? Matt does exactly this and falls forward with control; sliding down into his opponent’s hip and passing his guard with ease – thus showing how this simple approach can get you much more guard-passing success.

Watch the video below to see Matt Thornton explaining it in action: