Simplify Your BJJ: Go For The Leglock Immediately After A Takedown! 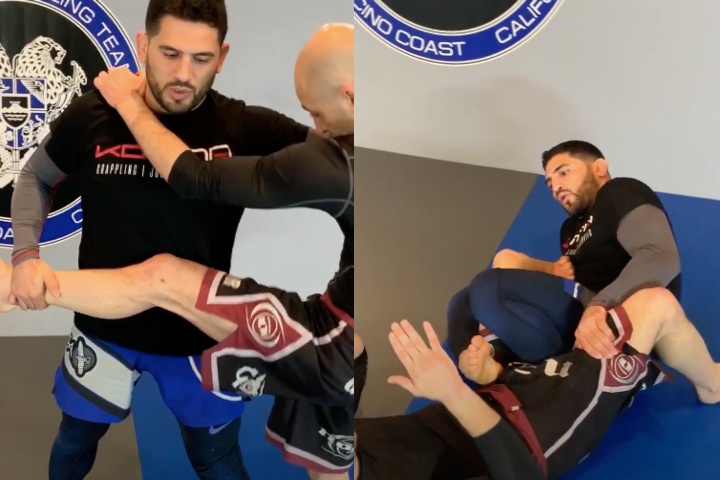 There are a LOT of cool sequences to try out and use in BJJ! One of our sport’s greatest advantages is exactly that; the opportunity to mix all of those moves together, with an ultimate goal of getting the submission. However, putting emphasis solely on multiple technique sequences can be detrimental to your growth as an athlete as well, for trying to do too much introduces way more possibilities for failure, too!
What does this mean? Well… It just may be the time to simplify your game a bit. Let’s get it done by going for a takedown – and then head-on for a Straight Ankle Lock.

TRY TO CONNECT THE STUFF YOU DON’T USUALLY DO

But let’s get one thing straight, regardless of the technique we’ll see in a bit; just because you’re going to simplify your approach a bit, that doesn’t mean you should stop being creative!

On the contrary. Invest your time into trying out new things, seeing how they work and if they’re applicable to your own Jiu Jitsu. Then, once you figure what those things are, start adding and drilling them. Find out ways to combine them with each other. But do it sensibly and in an orderly fashion!
In other words: yes, the objective should be to simplify your Jiu Jitsu occasionally. But you need to continue searching for ways so as to make it more creative as well.

SIMPLIFY BY TAKING THE STRAIGHT ANKLE LOCK IMMEDIATELY AFTER A TAKEDOWN

So, what’s one of the most creative and simple combinations? It’s one you’d rarely think about; going for a leglock immediately after a takedown! Let’s see it demonstrated in a No Gi situation, by Karen Darabedyan.

Karen starts by saying that his takedown setup is going to be a variation of Kouchi Gari to Ouchi Gari. He begins by getting a solid grip on his training partner’s wrist, and by grabbing the neck. Make sure to keep your elbow pressed against the opponent’s chest when you do this; if you flare it out, they can take advantage.

Now, to set up his Kouchi, Karen steps behind the training partner’s foot, basically gluing the inside of his own foot to the partner’s heel. From there, he applies forward pressure with his elbow into the partner’s chest; at the same time lowering himself down and grabbing the partner’s heel, lifting it high off of the mats.
If, by any chance, you start off by facing the opponent with your lead leg versus their own lead leg, you won’t be able to go straight to a Kouchi Gari. Instead, you’ll use your Ouchi Gari to push their leg back – then, right away, you’ll go to the Kouchi and further with everything else.

WRAPPING IT ALL UP

A lot of times, Karen explains, your opponents will plain and simple just fall here immediately. However, in the case they somehow do keep their balance, then no problem whatsoever! You’ll just go for the Ouchi Gari; just step in with your rear leg, use your lead leg to trip the opponent – and they’re down!
He points out that once this happens, you already have a grip on their leg. So, as they land, they’ll scarcely have any time to figure out what you want to do, let alone react to it. And what you have in mind is simple; glue your foot to their glute muscle, get your other one across their leg and onto their hip, fall back… And tap them out with the Straight Ankle Lock!

Watch this great demonstration and explanation by Karen Darabedyan on the video below: