Should You Ask A Black Belt To Roll? A Primer On Respect In BJJ 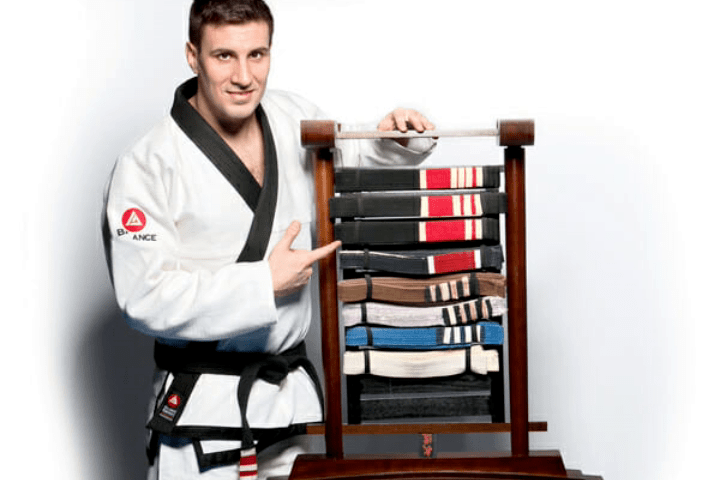 „Should I ask a black belt to roll with me?“ A question that seems to be unnecessary at first, but then again – isn’t it disrespectful to ask someone who’s a higher rank than you for a roll? Especially if that higher rank is a black belt who’s been training for decades at a time?
Respect is a funny thing in Jiu-Jitsu. Let’s consider it from the standpoint of this question.

IS ASKING A BLACK BELT TO ROLL A BAD IDEA?

First to answer the question: should you ask a black belt to roll? Or is it a bad idea to do so? The straightforward and simple answer is – no, it’s not a negative thing to do. You should be able to ask a black belt to roll, whether it’s your instructor, a fellow training partner, or anyone else.
The kind of a mindset that emphasizes the „downsides“ of asking higher belts for a rolling session is the more traditional one, a part of the old school Jiu-Jitsu for the most part. A black belt is also a student of the game, and in that respect he’s no different from a new white belt.

But just because you should feel free to ask a higher rank to roll doesn’t mean that there aren’t some things to keep in mind while doing it. Here are a few of them.

Politeness is in the essence of all respect-related things, and that is no different in BJJ. When approaching the black belt and asking them for a roll, do it in a polite manner.
„Excuse me, do you want to roll?“ This sort of a question and similar variants show that you’re being respectful and conforming. You don’t want to be aggressive about it, insisting for the answer to be „yes“… Which takes us to a second point.

THEY CAN SAY „NO“

You need to realize that some higher rank Jiujiteiros – black belts included – don’t have to accept a roll with you. They may say „no“ because they’re looking to train with someone a bit closer to their skill level at the moment. Or they may be injured, so they’re trying to evade additional injuries in the process (as it sometimes happens when rolling with spazzy new white belts).

Whatever their reason may be, don’t take it personally. They may want to roll with you a bit later on.

HOW TO ROLL WITH A BLACK BELT?

Now, if they answer „yes“, congratulations! You’re going to have a time of your life. But only if you approach it from the right perspective.

99% of black belts will want to go easy with you. They don’t have anything to prove, so they won’t try and „smash“ you to the ground. Sure, they may work on their offense or defense against you, but they won’t do it with 100% intensity.
They won’t… Unless you make them. Unless you roll with them in an uncontrollable manner, the one that depicts you wanting to prove yourself.

Doing this isn’t a good idea. Instead, what you should do is ask the black belt what sort of a roll they want to have. Then, try to learn as much as you can while applying proper technique throughout the roll. If they let you attack, attack with as much finesse as possible. If you’re going to defend, use your skills and keep your elbow away from their nose.

The important point is: don’t go pedal to the metal. If given an opportunity to roll with a black belt, do it respectfully and from a position of wanting to learn from them.