Should Women in BJJ Train More Often with Other Women Than with Men? 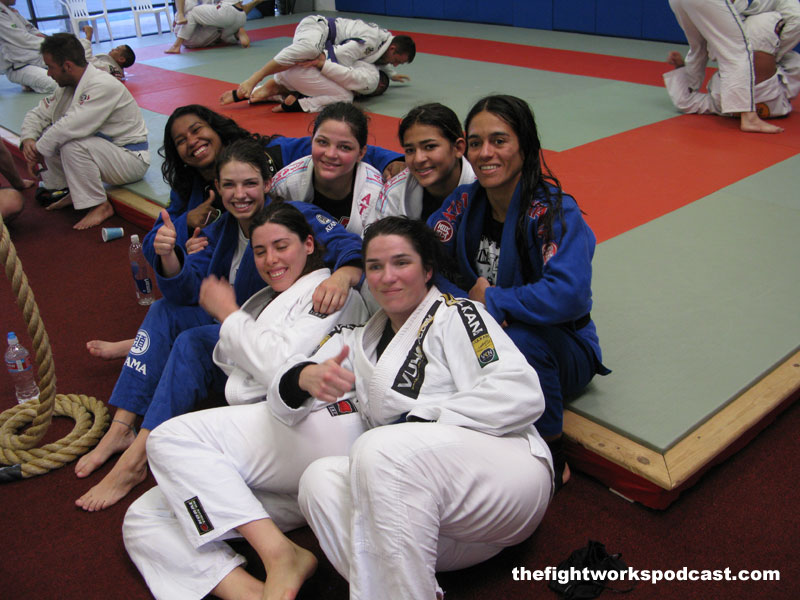 Lets be honest, BJJ historically has been a man dominated art. Times are changing though and it’s a good thing. This art was designed for the smaller less athletic individual to have a fighting chance against a bigger stronger attacker, so a woman is the perfect candidate for this combat style. The question presented now is should women only train with other women or should they also train with men?

One of the main reasons that our art has always had a hard time attracting women is obvious if you describe it out loud, big sweaty men giving you no personal space while fighting in between your legs trying to mount you then choke you out. It’s intimidating and it definitely makes the average woman uncomfortable. Most women prefer the fitness gym classes where you kick and punch in the air to the newest pop song, and many of them leave there with a nice sweat and a false feeling of being able to defend themselves.

The good news is that more and more women are starting to realize that BJJ for many reasons is one of the most effective arts out there and can prepare them for worst case scenarios far better then a combat cardio class. The bad news, many are training with women exclusively. Now don’t get me wrong, I see women as equals, but that does not mean there are no differences. Women do certain things better then men, but more often then not strength and size on average falls into the males category. The only way you can truly prepare to face a larger stronger opponent is to train with a larger stronger opponent.

Once you train for a while with women on the mat, you notice that their moves have a finesse behind them, because they can’t usually out muscle the male training partners, so they compensate with better technique. It becomes a really technical roll. But if a woman is only training with women, they tend to neglect that technical and mental development needed to overcome the bigger stronger opponent. The same goes for a male who only trains with his size opponents. One thing that makes BJJ so effective is the diversity of training partner sizes and styles. Neglecting that aspect in training is not ideal.

To bottom line this, I think women should be prepared to defend against a bigger stronger opponent and one who is most likely to commit a crime against them on the streets. That means training with men. One of our staple philosophies is being comfortable being uncomfortable. But I do think that a woman can train with women for the majority of their mat time, because it is also about having fun, enjoying the sport and building friendships, but they do need to put in some time against the males. One of my favorite things to see is when an untrained male steps onto our mat to try our art out and I pair him to roll with a woman. The look on his face after he gets tapped out over and over no matter how hard he tries. He then realizes how effective this art truly is. Even better then that though, is the look on the female students face, the confidence that emerges from knowing that she can handle the so called bigger stronger guy with ease.