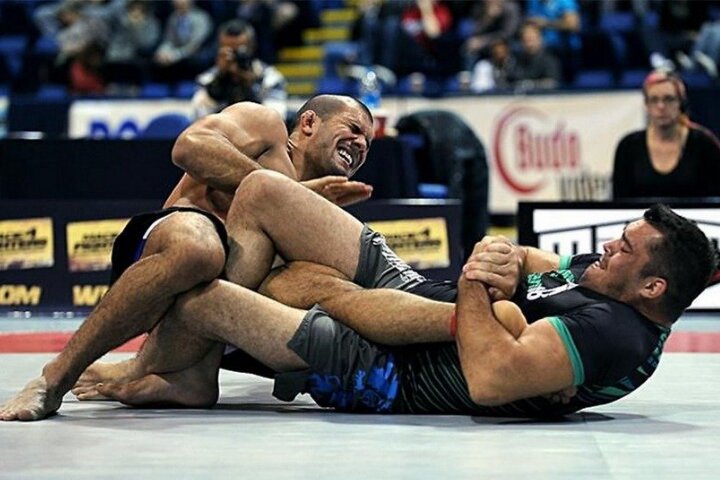 If you’re a Jiujiteiro that adores leglocks and setups that lead to them, then we have an awesome treat for you! In fact, it is so awesome that you’ll find yourself using it rather frequently, especially against those opponents that love to *smesh*. With that, it’s relatively easy to drill, ingrain into muscle memory, and utilize in a roll.
So, without further ado, we represent to you a fantastic way to setup the 4/11 position from Butterfly Guard, demonstrated by Andre Galvao!

Beginning from the Butterfly Guard, your first objective is to establishing an overhook.
Andre demonstrates that you are bound to get ample opportunity for the overhook if your opponent is attacking; especially if they are going for a pressure pass. For, even if they do pin you down, you can still get your arm through and establish position.

Once you’ve gained the overhook, you should seize control over the opponent’s other arm. Do this by grabbing it with your second hand and solidifying the grip by grabbing your wrist. From here, your goal is to hook the opponent’s leg (one on the same side you have the overhook at) and take your other leg out, placing it to the side of the opponent’s hooked leg.
However, before this, pay attention that you need to create a bit of space first. To do so, Andre demonstrates that you need to post on your hand. This not only serves as a precondition for getting that leg out; but also as a means to go further with your setup.

The next phase is a swingin’ one! No, really – you will be using a lot of momentum here… And it will lead you to a dominant position! Here’s how.

Essentially, Andre shows that you’ll need to invert and use the arm which isn’t overhooking the opponent to slide it to the side of the opponent’s hooked leg. Beware that you’ll need to elevate your hips off the ground for this one; otherwise, you won’t get the required momentum, but your opponent will be able to smash you quite easily as well.
Now, as you’ve gotten this arm through, you will shoot and extend both of your legs out; this will flip your opponent upside down. And as they’re getting inverted, you need to lock your top leg over the hooking one – and you have the 4/11 position!

Once the 4/11 is yours, you’re good to go! Leglocks await you; but first, Andre wants to make sure that you’re going to pinch your knees together and extend your legs, making sure that your heels are on the mats. This will prevent your opponent from pulling their leg out, which would incapacitate you from all leglock attempts.

In so far as the actual leglock techniques are considered, Andre demonstrates that – if your opponent doesn’t do anything whatsoever – you’ll have easy access to a Heelhook. However, most of the times they’ll defend, in which case you have additional steps at disposal.
If they use their other leg to defend by crossing it over the one you’re attacking, you can elevate its foot to your bicep muscle; this will create space for getting that Heelhook once more. Or, if they start turning away from you, then you need to pull their knee towards yourself for gaining access to submissions. And lastly, if they stiffen their leg out as a way to defend the Heelhook – just tweak your position a bit for the Kneebar instead.

Andre explains this setup and all of the great details that make it work below: