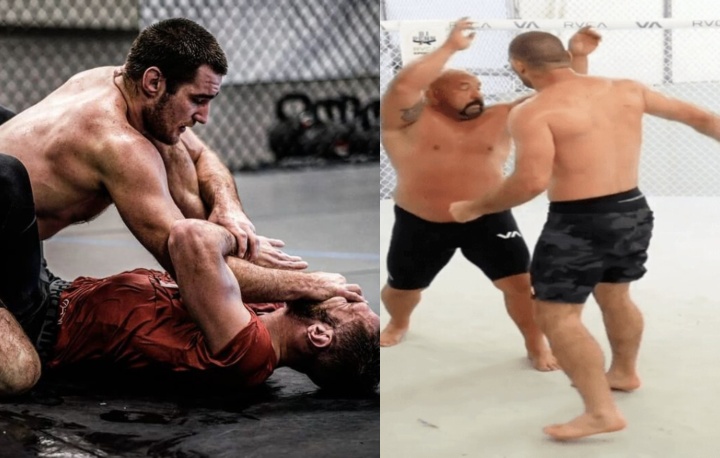 If you’ve been training BJJ for a while, you know how things can sometimes get heated during training. Stuff can turn emotional, even physical.

Such was the case when the Brazilian Jiu-Jitsu champion Orlando Sanchez got into a physical altercation with Sean Strickland, a UFC veteran, during a recent sparring session.

Sanchez told Flograppling about the backstory of the incident:

“I wasn’t helping him train for the fight. I didn’t know who he was. We were in the gym, goofing around and he heard that I was a BJJ world and he was talking some sh*t about Jiu-Jitsu and he literally came up to me and told “I didn’t care who you are but I’m gonna beat the sh*t out of you.”. So we got in the cage and grappled. It was nothing malicious. I just got in there and gave him a little tug on the arm. Didn’t injure him.  I had to take care of business because of what he said to me before.”

“Many people also reached out to me telling me that Strickland was a bully in the gym and even KO’d someone at RVCA two days before.”

“For all those that insulted me, you should apologize to me because i was actually defending Jiu-Jitsu.”

The attempt at sparring again afterwards didn’t go too well. Strickland was still visibly angry with the standing Mir Lock that Sanchez applied, and he left the cage quickly.
Orlando Sanchez is a BJJ champion, who won a gold in the ADCC and who also runs a number of Gracie Barra gyms.  Strickland has an  up and coming fight against Urijah Hall, which is to happen in July.

In reaction to the video, many grappling fans either voiced their dissaprovement of Sanchez’s technique or of Sean Strickland’s attitude and over-reaction.  The backlash upset Strickland, who took aim at the fans on his Instagram page.

He doesn’t have any bad blood with Sanchez but has something to say about the fans.

“I feel like this needs to be said about the video response.. What happened to the modern man?!?!?! You cowards sit behind your phone running your mouths to me and to each other.. Bunch of f*cking women using their thumbs to fight BUT to those men out there still down to scrap when you need to scrap I salute.. Keep holding it down, you’re a dying breed….”

“Come say that to my face. I’m a cage fighter. I hurt people for a living. I’d slap your F$%ing face.”