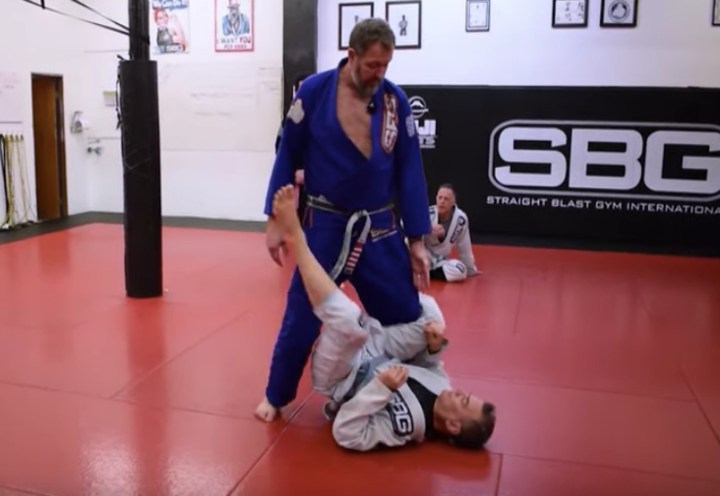 SBG’s Matt Thornton always seems to have great advice on the details that can make your Brazilian Jiu Jitsu game better by a large margin; be it in your defensive or offensive game. In this case, he shows what you can do so as to guard pass more effectively – even without using your grips.

USE YOUR PRESSURE, FOLLOW THEIR MOVEMENT AND OCCUPY THEIR SPACE

Coach Matt first points out that, when you want to guard pass somebody who has placed their feet above your knees, you aren’t aiming to control their feet. Instead, you should simply grip your training partner’s/opponent’s heels and, if they move their foot at that point, you need to follow it with your hand, maintaining pressure through your bodyweight.
This way, you can take advantage of their movement and pass more easily! Namely, this keeps the space between you and them occupied at all times and thus leaves out a great deal less of trouble for passing. Now you can initiate the pass by shifting their legs to the side when necessary and following them to an angle, instead of just trying to forcefully move their legs all over the place.

Matt says that this might – depending on the reaction from your partner and the opportunity that presents itself – end up with you using one pass or another. In other terms, you shouldn’t „stick“ to using a specific pass, but you should focus on keeping the pressure and on using the opportunities as they present themselves.
Also, you shouldn’t occupy space when it presents itself to you in a half-way manner. Instead, go in and take ownership of the space fully, keeping that pressure going at all times.

HEELS OFF THE MATT. RELAX. USE THEIR FRAME TO CREATE AN ANGLE AND GET CHEST-TO-CHEST.

Now, let’s say that your opponent placed their feet below your knees. Here are some additional guard pass tips that go hand-in-hand with that!

Coach Matt first removes one foot to create an angle and then immediately drops down, placing his far hand on his training partner’s hip and the other one on his knee. From that point on, he emphasizes, you never want your heels to touch the mat.
From there, your opponent will likely frame with their hands. In that case, you simply need to feel where they are supporting your weight. Matt does this by relaxing and making himself heavy to the partner’s frame (making him support his bodyweight that way), after which he simply changes the angle. In other words: wherever your training partner’s or opponent’s frame connect with you, you want to feel that frame and then change the angle, so as to connect with them more easily.

This isn’t only applicable in situations when your opponents frame by using their arms, but when they utilize their knee as well. It is the same thing, coach Matt says: keep your heels off the mat and make them hold you up. Then, you can try closing your eyes and feeling where the frame is – after which you use a simple movement that shifts you to the other angle, getting you chest-to-chest with them.
And that’s the final ingredient to this drill: once you get chest-to-chest with them, you’re not actually looking to guard pass, Matt says. You’re not looking to gain side control or similar – but you’re trying to connect with their chest. That’s your goal for this drill, hand-in-hand with taking space whenever it’s presented to you and with keeping the pressure throughout the movement.

Click the video below to see coach Matt Thornton explaining it in action: