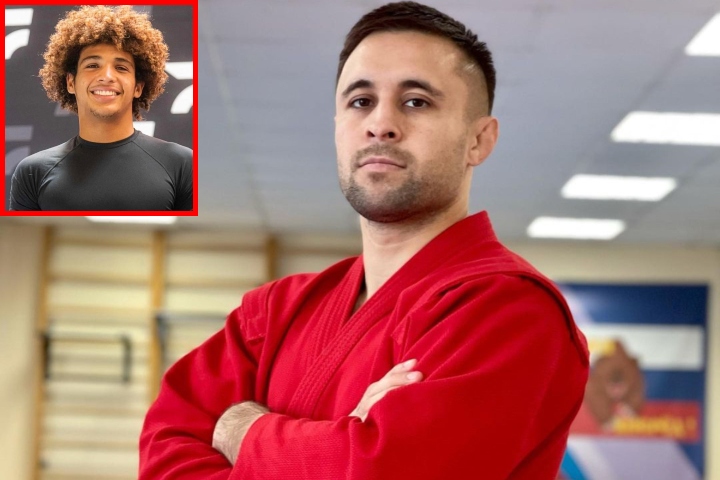 Uali Kurzhev, a 4x Sambo world champion, will take on Kade Ruotolo for the inaugural ONE Lightweight Submission Grappling world title (on October 21).
He is aware that there’s a tough test ahead. However, there’s also the excitement about the chance to prove himself, as he explained in an interview for ONE:

“I have analyzed my opponent; he has decent skills both on the ground and in stand-up. Didn’t know about him, first time I heard his name was when I got offered this fight.

“We discussed a game plan with my coach and the plan is to build our strategy around leg locks, as they are practiced in both Sambo and BJJ.”

He added about Kade:

I have mixed feelings right now because I’m still not a [BJJ] champion first of all.
Secondly, it’s my second match in submission grappling [under] different rules, but I’m so excited for this event and to have a chance to [compete against] Kade.

The 33-year old Russian athlete feels ready for the challenge:

I have a lot of experience. I’m sure he’s never experienced such an opponent in his background because he specializes more in submission grappling. I’ll bring lots of surprises to this match.

I understand the pressure and the audience, but again I’ve been in the sport for a long time. I have formulated methods to avoid those feelings. I’m clearly ready for this.

He also doesn’t feel any pressure to “prove” that Sambo is better than BJJ:

I don’t feel [any pressure to prove sambo is better]. I respect all the sports and BJJ is one of them. Both sports are incredible.

When it comes to sambo, there’s a harmony where you’re standing as well as being on the ground to grapple. But in Jiu-Jitsu, it’s more on the ground. That’s the difference, I guess, and that’s their [advantages].