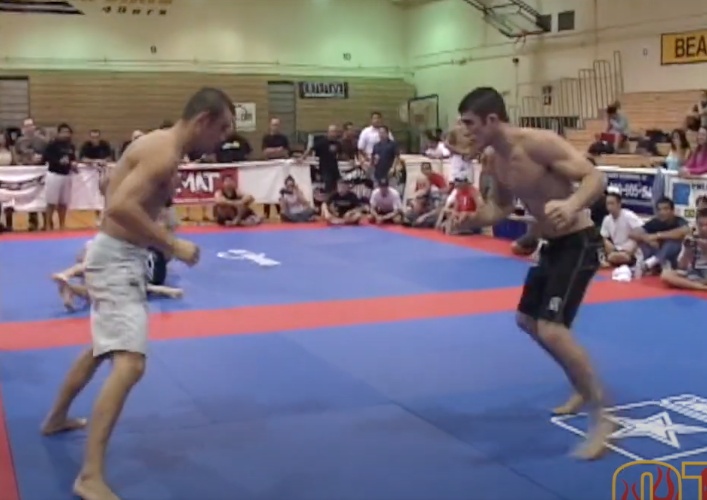 Old school bjj black belt released a rare video of brothers Ryron & Rener Gracie competing against each other in 2005. The brothers were going for real.

Rener Gracie had a Q&A with fans on reddit. He addressed his Jiu-Jitsu rivalry with his older brother Ryron, sparring mentality:

Rener, you often talk about how Ryron beats and submits you like every time you spar. Is it completely true? Do these 2 years he has over you still that important after 30 years of practice? How often do you dominate him?

Rener:It was true for the first 17 years of my life, then I finally caught him in a triangle armbar! Today he catches me 4 out of 10 times. I catch him 3 out of 10, the other 3 times no one wins, and every time we learn TONS! But in no case do I ever “dominate” him. No one I’ve ever rolled with (from UFC fighters to world champ bjj players) can submit me like Ryron can. Not even close.

Ryron Gracie (born December 1, 1981) is the eldest grandson of Grand Master Helio Gracie, the creator of Gracie Jiu-Jitsu. His father is Rorion Gracie, the world’s foremost expert in self-defense. Rorion introduced his sons to the art’s basic movements as soon as they could walk. As a child, Ryron spent the majority of his time watching his father teach private classes in their garage in Southern California. But, it wasn’t until he observed his father and uncles – Royce, Rickson, and Royler – easily winning “no-holds-barred” challenge matches that he began to fully comprehend the effectiveness of his family’s art. Like members of the preceding Gracie generations, he was born into this family tradition of testing the art against all comers, and he is always ready.

Rener Gracie (born November 10, 1983) is an American Brazilian jiu-jitsu practitioner, a head instructor at the Gracie Jiu-Jitsu Academy, and co-creator of Gracie University. As a member of the Gracie family, he is the grandson of Grandmaster Hélio Gracie, and the second eldest son of Rorion Gracie, the father of Gracie jiu-jitsu in the United States. Rener is also known as the husband of actress, model and former pro-wrestler,the record three time WWE Divas Champion Eve Torres.