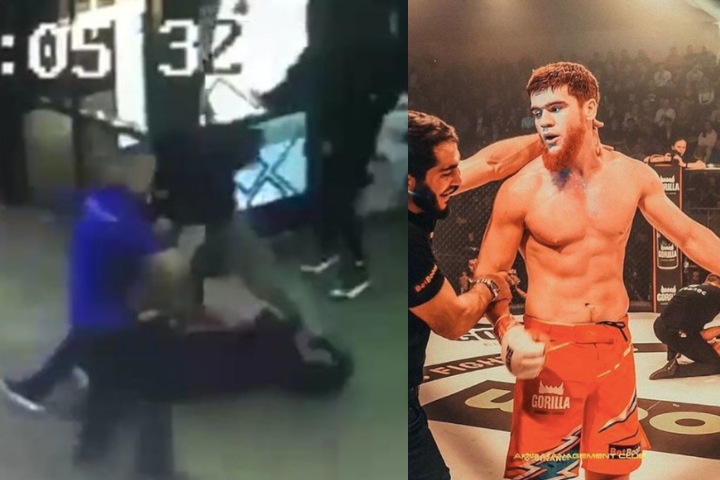 Undefeated MMA star from Dagestan Sharaputdin Magomedov knocked out a man who was kissing a woman in public.

In a video widely shared on Russian social media and from March, Magomedov is seen traveling down an escalator at a mall in Dagestani capital Makhachkala with a couple in front of him.

The pair are seen sharing a kiss, which provoked Magomedov, a devout Muslim.

Magomedov talks to the man at the bottom of the stairs and the lands a punch on him before they wrestle and both end up on the floor.

One of my favorite prospects Sharaputdin Magomedov in big trouble. Apparently he was offended that the guy standing in front of him was kissing his girlfriend pic.twitter.com/nQndpHodFV

Magomedov himself explained his actions to Match TV.

“You just need to understand the situation. Makhachkala still has its own unspoken laws, its own morality,” said the fighter of the mainly Muslim region.

“In Moscow, this is acceptable, [but] with us this is unacceptable. I could not remain silent and not make a remark.

“If it was a tourist or a foreigner, you could simply ask him [to stop]. I simply wanted to say that he wasn’t acting very correctly, but I didn’t manage to tell him anything.

“He took it the wrong way apparently. There was also pride. He hit me.

“I’m a professional fighter, it was unexpected for me, especially since we were inside a shopping center. I offered him to come out and talk, but he hit me.”

“The last blow is definitely unnecessary. But I’d already hit the roof, it’s bad that it happened. I definitely don’t regret that I hit him with my hand, but I’m sorry I struck him with my foot.”

Magomedov confirmed that the pair had made their peace after the incident.

“We talked. I told him that the last blow was superfluous, and he said that he got excited, that he began to kiss the girl on the escalator, he also understood and realized his mistake,” said the fighter.