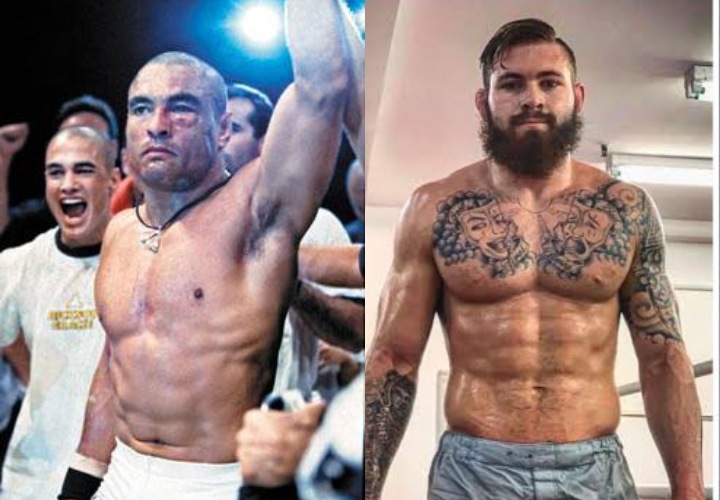 Chael was chatting in a van with Royce Gracie, and used that opportunity to first ask him: „A number of years ago, you got into a dust-up at Metamoris with Eddie Bravo. What was that all about?” And Royce answered: „Man, it got nothing to do with what you think and what everybody else thinks.“

He said, Chael recounts, that people think he had a problem with Eddie because he created a Rubber Guard, or because he renamed moves… It had nothing to do with that; what’s more, Royce had words of praise for Eddie’s marketing and business success.
However, Royce had also said that he didn’t like some of the images that Eddie was portraying to the BJJ community. And one of those portrayals was that Eddie once said that he cleans his mats with a Gi.

That was something that bothered Royce. So, the night when Eddie competed against Royler Gracie, Royce came into the backstage and wanted to confront Eddie about it – not to make it into anything physical, but to simply have it settled.

Then, Royce told Chael another story. During Ryan Gracie‘s “Pride Fighting Championships” days, the Gracie’s were once sitting at the same place as the Brazilian Top Team had. And, even though they didn’t like each other, everybody mattered their own business. That is, until Ryan walked up to the Top Team, shaking everyone’s hand up to the last guy – who he sucker-punched into the nose!
The Gracie’s pulled Ryan aside and asked him what that was about. And, well, Ryan explained that this guy was talking trash about their family… Five or more years ago.

Chael says that Royce was trying to make a point out of this story: that yes, their Gracie family might seem civilized, but they most certainly are keeping track of things.

Chael then moved on to ask Royce – Rickson Gracie, in his prime, against Gordon Ryan right now and under Abu Dhabi rules – who’d win?
After around 5 minutes of analysis, Royce told him that he doesn’t think that Rickson would be likely to submit Gordon and that, of the two, Gordon would be more likely to do so… But that he also doesn’t think that Gordon would submit Rickson – in simple terms, he just wanted to aknowledge that he’d be more likely to do so.

But, what about Rickson vs. André Galvão? Royce told Chael that Rickson would be more likely to submit André; but that he isn’t sure if he could. Nor that André would be able to submit Rickson, at the same time acknowledging that André would be good with positions, even though the Abu Dhabi rules would be favoring Rickson’s approach to positioning.

And what about André Galvão vs. Gordon Ryan? Under Abu Dhabi rules, Gordon Ryan would have many ways to submit Galvao, Royce explained to Chael. He also said that he thinks that André wouldn’t be able to submit Gordon – that, even though he would have a good position, Gordon is very tricky with his leg attacks and nuances.

Tune in to hear more details of Chael Sonnen’s conversation with Royce Gracie in the video below: