Ron Tripp, The Only Person to Defeat Rickson Gracie in Official Competition 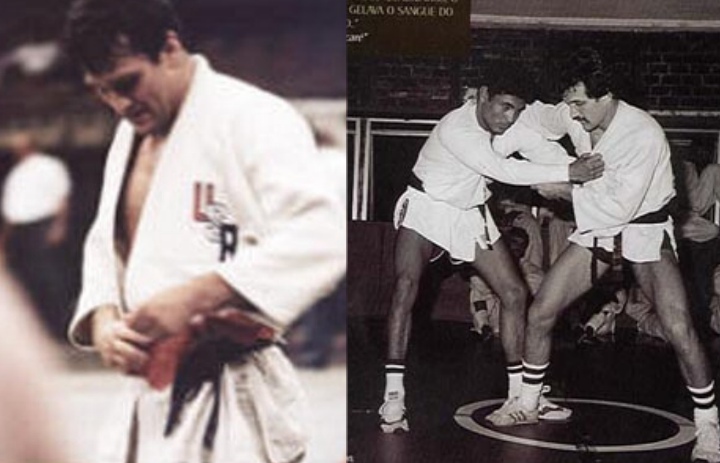 Photo: Ron Tripp and a Sambo match between Rickson and Rolls Gracie.

His name is well known in the MMA world, especially among Brazilian Jiu-Jitsu and submission grappling enthusiasts, as he is the only person to hold an official victory in competition over Brazilian Jiu-Jitsu legend Rickson Gracie. Tripp was promoted to 10th degree in Sambo in 1995 and became America’s first Merited and Distinguished Master of Sport in 1996. He was promoted to 6th dan by USA Judo in November 2006.

The 6 foot, 205 pound Tripp excelled in both the sports of Judo and Sambo. Trained by Pat Burris, 2 time Judo Olympian and Olympic Judo Coach, Tripp’s fight career in judo lasted from 1982 to 1995. He is also a Doctor of Chiropractic and was an assistant wrestling coach at the University of Oklahoma under Hall of Fame Coach Stan Abel from 1979-1992. Tripp trained in Japan for six years, and during that time trained under World Judo Champion Chonosuke Takagi at NichiDai University, home of MMA star and Olympic Champion Makoto Takimoto and 2 Time All Japan Judo Champion June Konno. In 2006 he founded C3Fights, a professional MMA company, and still personally trains C3Fighters at the USA Stars Training Center in Oklahoma City, Oklahoma and coaches and corners UFC Fighters Joe “Daddy” Stevenson and Melvin “The Young Assassin” Guillard at UFC events.

In 1990, Tripp was submitted by Rigan Machado in 39 seconds, at the Sambo Pan Am finals.

There is no actual footage of the Ron Tripp vs Rickson match but here is a video of Rickson winning in a Sambo competition in the US. You can see that he is also wearing the same multi colored swimming shorts that he wore in his beach fight vs Hugo Duarte.