Romulo Barral promises to fight for victory at the Pan Ams 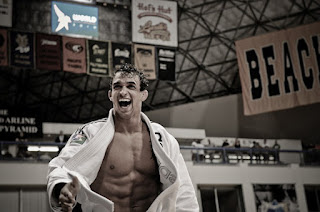 Thanks to our friends from www.grapplerinfo.pl  for providing us with the information. Romulo Barral, the Two-time BJJ world champion, at the recent San Diego trials for the World Pro took second place in the category – 92 kg succumbing in the final to Xande Ribeiro. Rominho despite this defeat was pleased with his start, and the confrontation with the legend that is the Ribeiro:

It is important to draw lessons from our victories or defeats. I think our fight Xande was very nice and enjoyed by all.

Romulo said the fight for victory in the heavyweight category at the upcoming Pan Ams in California:

We are with our team training camp in Las Vegas. I am very motivated. I feel 100% well in spite of the fact that I have a few injuries. But I’ll try to at the tournament to give everything in my power.

I have a few fight offer, but still wonder whether it is worth the fight. Soon I will have some news
Marcelo Garcia is a 9-time World Champion and known for getting to the back and finishing with the rear naked choke, even against much bigger opponents. This four-part system covers taking the back, jumping back takes, maintaining back control, and finishing from the back. Learn Marcelo Gracia's famous Back Attack System. USE PROMO CODE "BJJEE TO GET 10% OFF.