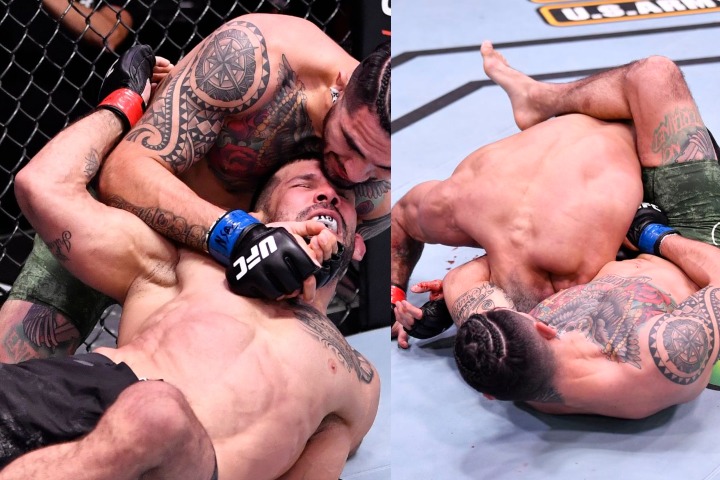 Multiple times world-champion in Jiu-Jitsu and one of Brazil’s hopes in the UFC, Rodolfo Vieira had his first loss in MMA when he was submitted by Anthony Hernandez at UFC 258 back in February.

In that fight, Vieira started strong and even got the mount position on Hernandez. But once Hernandez was able to escape, Vieira looked exhausted. Vieira then suffered strikes from Hernandez before getting caught in a guillotine choke in the second round to the surprise of the whole MMA community. Hernandez was just a blue belt in Jiu-Jitsu after all.

On July 17 Rodolfo Vieira returns to UFC action when he takes on Dustin Stoltzfus at UFC Fight Night: Makhachev vs. Moises.

Vieira answered questions from the media and promised that he fixed his mental game and his faulty conditioning problem:

“It was very hard but I lost before in jiu-jitsu, so this time was not different. The defeat made me even better.”

“I was not expecting to be submitted like that, but I was so exhausted, so tired, that anybody could submit me there in that situation.”

“I was too anxious to finish the fight early… my mind just went to a place where I lost mentally in that moment… I tried to get better in all the aspects of my game, especially mentally and also my cardio.”

“I needed to learn how to like being inside the cage. That was something that I never liked. I did seven fights there and never felt comfortable inside the Octagon, so I had to practice…

“I feel I can be very good in this sport, that’s why I keep trying. Overcoming that fear of being inside the cage, it was hard to get there, but it was better after I overcame that fear to be inside the Octagon.”