Robert Drysdale’s Remedy For Fear of Competing in BJJ 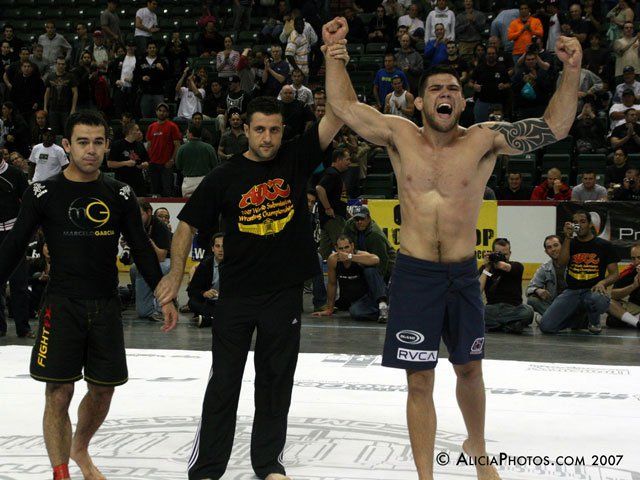 Someone recently wrote that the number of active BJJ competitors in some countries are declining, and so the obvious question to ask is what underlying factors might be behind a practitioners decision to compete or not.

Placing too much emphasis on the importance of winning or losing is tough.

A practitioner who mainly values himself through his result is probably opting out. The reson being that if he competes and loses, then this will directly reflect on his self-image and status. Logically, this might also be one of the key reasons as to why some instructors choose to sit on the sidelines. This conclusion might best be explained through the following underlying assumption: “If I compete and lose, then my students and others might think less of me, maybe even reject me.” On the other hand, if the practitioner doesn’t compete, then his self-image and status will remained intact, thus the incentive to compete severely diminishes.

Some people have a natural way of stepping up their game and to perform at their best ability under stress, however, this is not a general ability among humans. The reason for this is something called the fight or flight response. This response is quite useful when we are being chased by a predator and we need to get away fast or to grab a rock and attack. During this response, blood is accumulated in the arms and legs increasing our ability to move fast. At the same time, this also decreases our cognitive abilities, which can impact our choices. The fight or flight respons is not only activated  as a result of real direct actions, but also through thoughts about an event (past, present, future) depending on how we interpret that event. If competing in BJJ is interpreted as facing an unknown opponent who wishes to harm you it triggers our fight or flight response and thus increases a persons stress levels. It is also worth mentioning that while the fight-flight response is activated, the immune system also becomes secondary and thus broadly immunosuppressive, meaning that the body possibly could experience a greater susceptibility to disease during the fight-flight response.

Quick fix: Mindfulness meditation with a good amount of breathing reduces stress. Why not start sharing your thoughts with others like for example your coach.

This is probably the most common reason why coloured belts stop practicing BJJ entirely and decline signing up for a competition. (Much has been written on this subject.) Some people interpret the belt or stripes as a sign of who they are and they rank themselves according to the color of their belt, almost as if it is integrated into who they are as a person. (I am a blue belt instead of I have a blue belt) If a blue belt is tapped out regularly by other newer blue belts or even perhaps white belts, then the blue belt might interpret this as personal failure and as if he is not progressing which probably will not motivate him to compete.

Quick fix: You are not your belt! Millions of people have belts too and they only cover so much of you ass! Have fun and be playful. This is a lifestyle remember?

The power of the Ego:

This could also be a potential factor as to why people chose not to compete.

The ego is namely a mental construct on which a person often bases his identity. This construct is mainly false and often prevents us from developing and reach our full potential. An example of a strong Ego in action is when a practitioner uses excessive strength during a roll to “win” or feels a need to explain a correct technique to a partner who just choked him out. A practitioner with a strong ego will probably feel better keeping his Ego intact and the best way to do it is not to accept any challenges outside of the gym.

Quick fix: Get off your high horse and learn by listening and trial by error. Lower your expectations. Nobody cares whether you win or lose, ok perhaps some will, but that is something that is beyond your control which you can’t do anything about. Quote: “ people don’t care how much you know, they just want to know how much you care”