Robert Drysdale: The Fadda Lineage Could Actually Be a Gracie One! 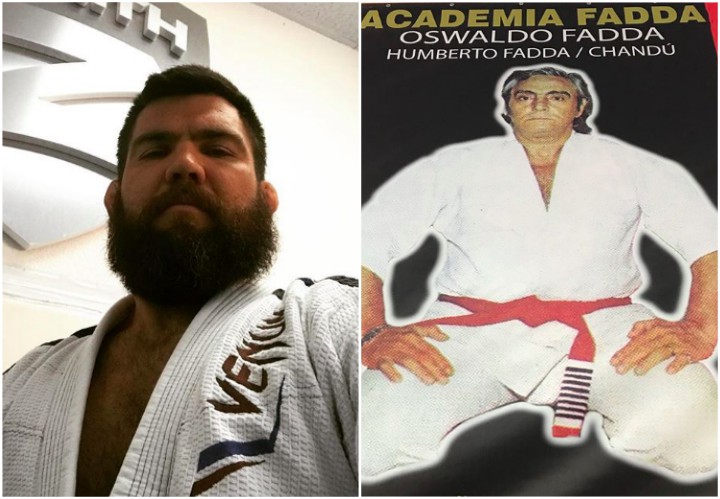 In his up and coming documentary – Closed Guard: The Movie – Robert Drysdale will showcase the full beauty of BJJ history… And potentially change the way we’ve been perceiving the story of Jiu Jitsu as a whole!
A certainly important part of that story are the lineages. For example, a question arises: is the Fadda lineage really a non-Gracie one… Or is it actually a Gracie lineage?

To answer this and many other interesting questions that the documentary will cover, we will be speaking with Robert and learn more about the importance that his written work of research has.

BJJEE: Robert, we’re very excited about your upcoming “Closed Guard: The Movie” documentary! Would you mind telling our readers what is it about and why do you think it is important?

Robert: The whole thing started when a student asked me a question regarding the history of BJJ and, to be frank, I had always been a little bit skeptical over the official version of events as well as a little embarrassed over not being able to give good answers to the questions I was being asked.

It was then that I recalled that, years ago while visiting the home of one of our affiliate schools in Spring Hill, Tennessee, my host Ray Casias showed me a book called “Choque” by Roberto Pedreira. I thought it was interesting and a good place to start so I ended up purchasing and reading all 3 volumes. I thought the book was fascinating and the history of BJJ far richer than I had previously thought. So, the idea for a documentary came after reading “Choque”.

BJJEE: So, essentially, the documentary has a goal to inform the audience about the history of BJJ?

Robert: Yes, I thought that the BJJ community as a whole would appreciate understanding its roots. Keep in mind, though, that the film is not an adaptation of the book I mentioned by any means.

BJJEE: Understood. And so you started writing articles on the history of Jiu Jitsu in Brazil, in order to provide the building blocks for the documentary itself. But you also did this in order to create a basis for others to understand what the most important and questionable points of BJJ history are, right?

Robert: It somewhat is. I began my own research in the Brazilian National Library where I was able to find some original articles that were relevant to the development of BJJ away from its Judo mothership.

The goal has always been to substantiate, as much as possible, the allegations of the film – especially since some of them contradict much of the official narrative. Needless to say this will ruffle some feathers but the goal is to try to bring old characters back to life and give them their due credit while being as accurate as our limitations allow.

BJJEE: And one of the pieces of your work in this direction is an article which questions whether the Fadda lineage is a non-Gracie one. Could you inform our readers who Oswaldo Fadda is, who his teacher was and what their importance is for the BJJ community?

Robert: The Fadda Lineage is an interesting story. Much like Carlos Gracie’s lineage, it is clouded in mystery.
You have got to keep in mind that then, much like today, people needed to make a living and that included having credibility. So, it was not unusual to want to associate with the Japanese, Maeda in particular.

Oswaldo Fadda learned from Luis França who has, in his turn, allegedly learned from Maeda himself. The problem is that there is no evidence of França ever having a relationship with Maeda. There is some indication that França may have learned from Takeo Yano who has, in his turn, had a relationship with Maeda. França could have learned from Yano while serving in the Brazilian Navy, but the only actual evidence we have is that França was a student of the Gracie Academy, in particular of Helio Gracie, as we show in the article.

But of course, then like today, people normally had more than one instructor. Which makes the whole lineage discussion a complicated issue.

BJJEE: So, what are the repercussions if it is, indeed, established that Fadda and his students are not members of a non-Gracie lineage?

Robert: None other than showing that França at the very least had a relationship with the Gracie Academy. Whether he learned from Yano and/or Maeda remains a mystery. The case for Yano seems plausible giving the timing of their enrollment in the Navy.
At any rate, the only evidence we have suggests an apprenticeship under the Gracie Academy.

BJJEE: Would you mind telling us, in short, what is the most compelling evidence for that claim?

Robert: Firstly, there is an article from 1938 where França is scheduled to fight a man referred to as “Gaúcho.” In this article França, Oswaldo Fadda’s teacher, is representing the Gracie Academy while “Gaúcho” is representing “C.R.F.”
The second piece of evidence is an article from 1956, which is referring to França as one of “Helio Gracie’s best students” (the credit for this last discovery is of a Brazilian researcher called Elton Silva who provided the source for the film).

BJJEE: And if the Fadda lineage is actually a Gracie lineage, what does that mean for Fadda’s importance and influence onto BJJ?

Robert: Personally, I think that the lineage issue is more of a curiosity, but that it is also important to correct them for historical accuracy when the sources allow for this correction. Fadda should be commended for a far more important role he played in BJJ than allegedly being a non-Gracie lineage: he was a pioneer of teaching BJJ to the handicap and to underprivileged children from the poor neighborhood of Bento Ribeiro in Rio de Janeiro.

During one of the interviews, one of the Fadda’s students told us in tears how Fadda and his wife would manufacture gi’s out of flower sacks for the children so that they could train. There is also the story of “Torpedo”, a handicapped practitioner who would wheel himself into class and who seemed to be the life of the Fadda Academy. These were quite  moving stories. In my view, being a non-Gracie lineage pales in comparison to Fadda’s role in opening BJJ outside the South Zone where all the wealthy “Carioca’s” lived.

BJJEE: So, you would say that the whole lineage story is not so important for our contemporary love for Jiu Jitsu; but that it is necessary to probe deeper if we wish to understand the history of Brazilian Jiu Jitsu with more clarity?

Robert: Lineages, in my opinion, are very arbitrary – in the grand scheme of a martial arts journey, we all have many teachers. It is overly idealistic to believe that one person teaches you everything. In fact, from my experience mat time is your main teacher. But it is still important to correct history when possible.
People just shouldn’t get lost in this lineage debate: the fact that França at least represented the Gracie Academy doesn’t diminish his or Fadda’s role in BJJ.