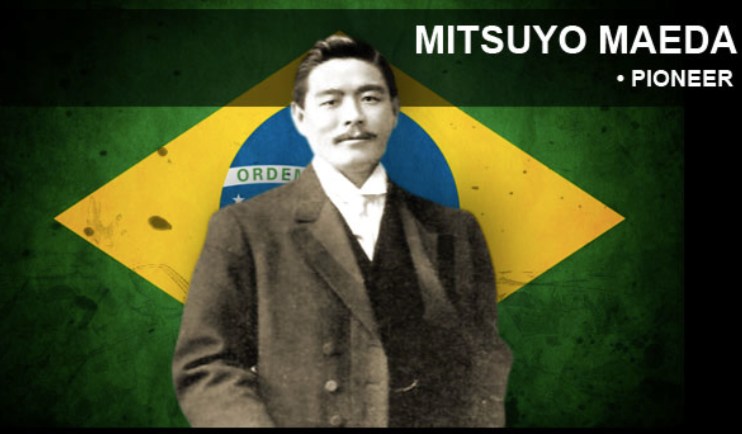 BJJ history is full of undiscovered secrets, of interesting twists and turns! One of them rests on the discussion of whether or not the legendary Mitsuyo Maeda has promoted his Brazilian students to the rank of black belt.
Robert Drysdale has had a few words to say about this topic in one of his research articles that look into the history of Brazilian Jiu Jitsu. We sat down with him and learned a bit more about it.

BJJEE: Thank you, Robert, for giving us yet another peek into your awesome study and research of BJJ history – and the ways that it could change the BJJ community’s views!
Before we delve into the topic of your article, would you first mind telling us how your documentary, Closed Guard: The Movie, is coming up? Are there any new developments that we should be excited about?

Robert: Thanks for giving me the opportunity. The production is going well and we are looking at having a rough draft by the beginning of next year. It is a lot of work finding all the b-roll material as well as synthetizing decades of history and introducing new characters – all the while making it both entertaining and informative. It has become a far more complex challenge than I initially anticipated.

BJJEE: We’re glad that it is going well! Turning to the topic at hand; in our previous interview with you, we’ve only briefly mentioned Mitsuyo Maeda, a very significant figure for everyone training Brazilian Jiu Jitsu – a figure that you put a heavy emphasis on in your research.
Could you, shortly, share with our readers so as to who Maeda is and why it’s important for us to understand his legacy?

Robert: Maeda was a world traveler who left Japan for economic reasons and attempted his luck wherever he could find it. There is a lot of myth that surrounds Maeda’s life and career… As a matter of fact, there is a book coming out next year called “Craze volume 3” by Roberto Pedreira that will cover much of this.
In the meantime, here is a link to a few myths that regard Maeda: http://global-training-report.com/myths_Maeda.htm

BJJEE: Thank you! And one of these articles is the Mitsuyo Maeda Promotes Five Brazilians one. This is a very interesting article indeed, as it deals with an important question: the one of Maeda promoting his students. For, the case of somebody being promoted by Maeda hasn’t been documented anywhere else other than in one isolated instance – the one you analyze.

In this instance, it is said that Maeda promoted his Brazilian students to the so called „primeiro galão“ or to the „first rank“.
Why is this piece of documentation so important, and what kind of further questions does it pose for the history of BJJ?

Robert: There is the case of Donato Pires dos Reis claiming to be the only person in Brazil with a diploma from “Conde Koma” (Mitsuyo Maeda). But, even though sources seem to indicate he had a diploma with him, it can’t be confirmed that it was indeed from Maeda.

This new article is the only concrete example of a promotion we have of any Brazilian by Maeda. This, therefore, shows that Maeda did indeed have Brazilians whom he promoted.
What isn’t clear is if they were promoted to the equivalent of “brown belt rank” (or first Kyu) or to the “first degree black belt” (shodan level). Or if he has, quite possibly, created his own grading system.

What is clear, though, is that these 5 Brazilians were skilled enough to be that which we would today consider to be a black belt level or at least close to it.

BJJEE: So, the „primeiro galão“ promotion could, amongst other things, mean that these Brazilian students were promoted to black belt. And, as you’ve mentioned in the article, Maeda reportedly said that he has never given a black belt to anyone in Brazil.

What is some of the proof that goes hand-in-hand with the possibility of a black belt promotion? Which proof doesn’t – and why is this so important?

Robert: The interview I mention in the article could well be a mistranslation or just hearsay. It’s hard to say.

Maeda allegedly told a friend in 1928 that he had never promoted anyone to black belt. But, there is no evidence of this conversation ever taking place and no evidence for that which has been said. Additionally, the interview allegedly took place in 2006; in other words, when there has been plenty of time for someone to change or recreate memories. This is a common problem with the use of oral-tradition as a source.

BJJEE: So, it could be interpreted pretty loosely. Nevertheless, it is important to keep probing in order to understand the history of BJJ a little bit more, wouldn’t you say so?

Robert: BJJ as an art is growing worldwide and that’s not changing. However, reporting history as accurately as possible is crucial in my opinion. I think that knowing your roots is important for understanding where the art came from and for better understanding so as to where it’s going.

Some people don’t care about History as a discipline, but having an understanding of our past gives our present and future more sense.

Read more on this interesting topic, researched and elaborated by Robert, on the following link: http://global-training-report.com/drysdale_2018_maeda_promotes_5.htm