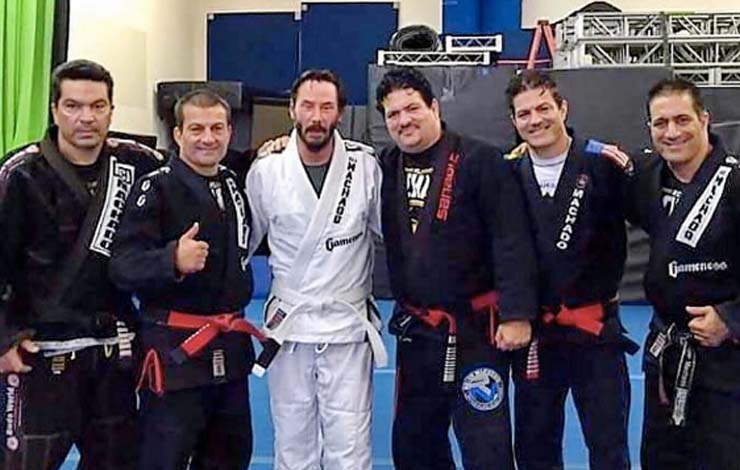 Rigan Machado is one of the biggest ambassadors of bjj in the USA. Along with his brothers he’s worked on popularizing bjj with the help of one Chuck Norris since the early 90s.

He was related to Carlos Gracie via his aunt’s marriage so naturally from the very inception of popularity of bjj he has been on the front lines.

The latest interview in length describes the many opinions and attitudes of the bjj pioneer including his stance on heel hooks, Gracie family disputes and other matters.

He is a Carlos Gracie Junior’s very first black belt but his bjj was also colored with Rolls Gracie’s influence.

“I think everything is evolution from the beginning there were no rules now they have weight classes, it’s become like a sport. You come to a point where you have to think about not hurting the athletes but the athletes show their ability and strikes, kicks things like that. If you do spine cranks, neck cranks that’s gonna hurt the athlete and you don’t want that to happen with some technique like the stamp to the head. That’s not class.”

When prompted about Inverted Heel Hooks he answered:

“I think heel hooks are good for MMA and not for sport jiu jitsu because of the number of the injuries. The whole chess game is on the ground and a lot of people try heel hooks and when you feel you’re gonna hurt your knee I think it’s the techniques you grab all the time to try and preserve the athletes. Let’s put this out. But now with Abu Dhabi competitions they kinda bring it back a little bit and I agree I think it’s good to have in nogi but int he gi I recommend to fight more clean because of the sport. “

When it comes to the Machado family all the controversy has been contained or there’s barely any anyway but in the Gracie family there’s been an assortment of various disputes. When asked why are there so many controversies related to Gracie’s Rigan answered:

“I’ll explain why. When you grow up was one bag, Carlos Gracie, Helio Gracie, everybody under their supervision . When you come to America the older guys died. We kinda lose the guide a little bit – who is the mentor of these 200 guys under them, this group.  Because we lost this guidance a little bit. And suddenly you put in this group power, fame – elements like that which are in the nature of a human being like whoa I want this for me the other ones (say) oh no, I want this for me. And let’s break because I want the same you want the same and they start to break for the lack of guidance,”

Rigan continued: ” Everybody the same age at the time creates different groups different factions. When I saw that I said the power is the brotherhood, the family, this beautiful culture created by the pioneers like Carlos and Helio and suddenly I start thinking like how can I change that for my brothers. Because this is gonna happen to us. Things are gonna get right between us and I didn’t want to lose that because at least in my world it is the most beautiful thing  the family . To be around this group when it was so united was the most beautiful honor and pleasure to be in their group and to break into pieces like that it’s kind of sad because we still have that kind of the learning we had from the masters Carlos and Helio but wish everybody was together. But because of the evolution things happen, we break in different groups.

I went to my brother and said let’s do one thing, we need to create a culture between us, the first thing what’s the problem between us we can have? Ego. Who is the best? Let’s not have the best let’s put the ego outside. We don’t have ego. Now, we maybe work together maybe not but whatever you do I will support you. “