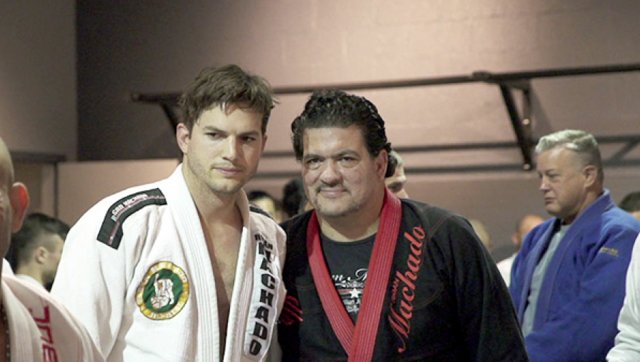 When news broke out that actor Ashton Kutcher had been promoted to purple belt by Rigan Machado, the BJJ community had mixed reactions. Some were happy about the news, many were not and some made comments about Kutcher not knowing how to tie a belt (according to the picture below).

The problem seems to be the speed at which he was promoted to purple belt. Back in February 2014 he was a promoted straight to a ‘2 stripe blue belt’ by Machado. Kutcher wrestled all throughout his chilhood but he only started training under coral belt Rigan Machado in California about two years ago. While on trips abroad he has trained namely at Ricardo De La Riva’s in Rio de Janeiro and Roger Gracie academy in London. After daily private lessons for a year, he was promoted to BJJ blue belt (2 stripes) under Rigan Machado in February 2014.

Rigan Machado recently gave an interview to BJPenn.com where he gave more insight on Kutcher real level in BJJ:

“For those who don’t know, Machado is known to train a few celebrities at his gym in California. So just for fun we asked the legend which celebrity has the best grappling skills. It turns out it’s Kelso from That ’70s Show. That’s right, when asked who had the best skills Machado said, “I think Ashton Kutcher.” Machado even gave a breakdown about why he thinks the star is so talented, “He’s a phenomenal wrestler, I think people don’t know, but his background in wrestling is a very high level. I was shocked.” He said that Kutcher really loves jiu-jitsu and could probably do very well as far as competing because he has the right body for it, “He has the long legs, the body size like Roger Gracie. Great balance as a wrestler.” 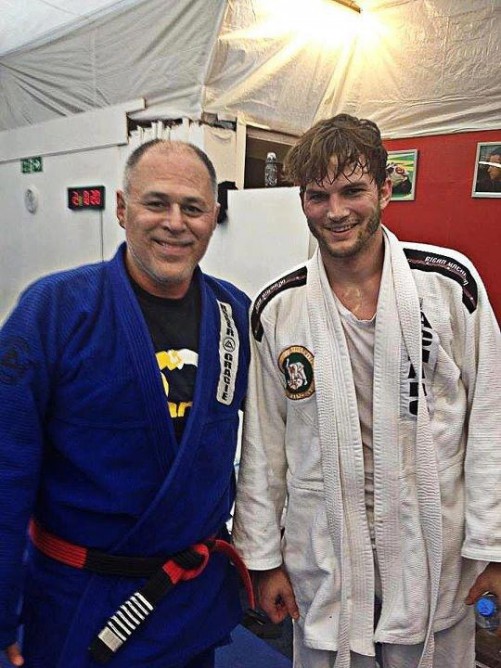 Rigan Machado has also issued a statement for TMZ Sports. He says that Ashton Kutcher is a legit BJJ player and learns fast thanks to his wrestling background. He also invited him to compete at the first competition of the Jiu-Jitsu world league on January 15th:

Rigan heard all the haters after Ashton earned his purple belt earlier this year. Detractors thought it was just a case of Hollywood favoritism, but Machado says Kutcher is a serious terror on the mats.

Rigan says Kutcher is the best celebrity he’s ever trained — which doesn’t seem like a high bar — but he adds … Ashton could beat some pros … “because his background is in [high school] wrestling he learns so fast.”

Machado has a big Jiu-Jitsu event scheduled for January … and says he’s invited Kutcher “to come and compete if he wants to, if he decides to compete he will do will good.”