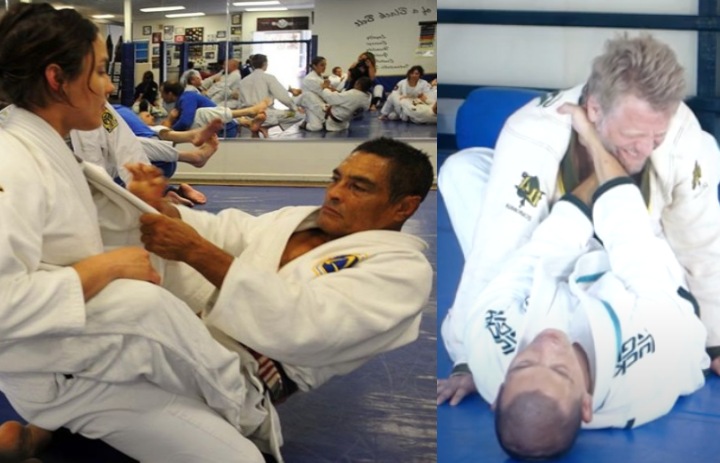 Chokes from closed guard (performed in the Gi) work well because you have control over much of your opponent’s general movement; you are keeping him at a fixed distance and manipulating his posture, all the while applying the choking pressure to his carotid arteries with your hands.

General Choke Guidelines
–>You’ll have to break their guard and keep it broken down to perform these chokes.
–>Make sure that your knuckles or forearms, as well as the lapel (depending on the specifics of the actual choke) are pressing against their carotid arteries – that you’re not just „crushing“ their throat, which will rarely lead to submitting them.
–>If you need to use strength a lot, then you’re not doing it right. Again, remember to position your arms properly, against their arteries; it should not take a lot of strength to tap your opponent if positioning is correct.
–>As a general rule, when in doubt – reach deeper into your opponent’s collar.
–>Pinch your elbows to your chest and don’t let them flare out when you are finishing a choke. This will make it tighter.
–>Be wary that you can take advantage of your opponent’s attempts to get his neck free from the choke; he will use his arms to do so. When he does that, you’ll have options to transition to an armbar.

Rickson was know for his cross choke from inside the guard and also mounted. In tournaments once Rickson got one grip in the crowd would start chanting down from 10 and his opponent always tapped before the count ended… Rickson’s black belt, Henry Akins shows the secrets he learned from Rickson to make an effective closed guard cross collar coke.