Rickson Gracie Unsure About if Kron Will Go Back To MMA 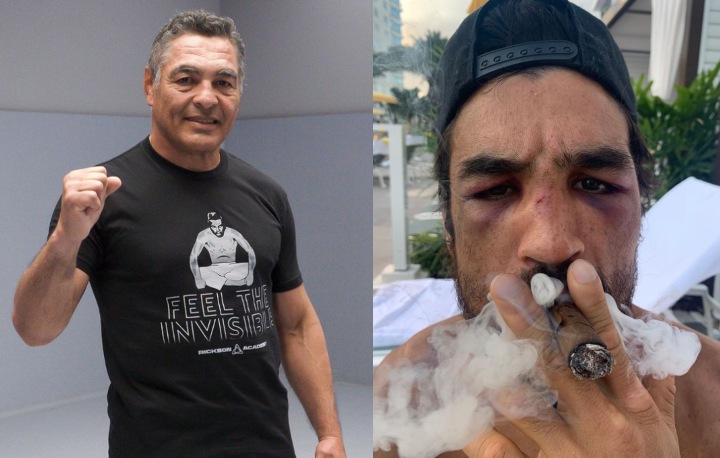 Kron Gracie is currently the only representative of the Gracie family in the UFC. He had his first match in 2019, winning against Alex Cacares with a Rear Naked Choke. In the same year, however, Cub Swanson beat him via unanimous decision. But, what made Kron’s matches particularly interesting for many Jiu-Jitsu fans was that he focused on striking throughout them; not on Jiu-Jitsu, which is his specialty.

His cornerman and father, Rickson Gracie, subsequently confessed that he wasn’t happy with how Kron carried himself throughout the fight.
In a recent interview for the Trocação Franca podcast, Rickson revealed that Kron was too emotional going into the bout:

You don’t have to be emotional when you fight, and I think Kron was emotional. He wanted to prove himself and to his friends that he could take a punch, that he’s not afraid of getting punched, that he wasn’t worried about using only one skill and delicate technique to win fast without getting hurt, keeping his face clean. He said: “I can prove that I’m a man, that I’m in this environment and I can brawl.”

He proved to himself that he has heart, that he’s brave and has cardio, that he can take the pressure, but I already knew that in my head. I know he’s an animal, he’s a warrior. What he showed me was lack of ability to work strategically on someone else’s weakness. I never liked clashing heads — I always liked catching someone when they were distracted, to surprise them.

I don’t like taking the toughest path, I like taking the door that’s open, the easier way to win. The quickest, the more efficient way, and causing less pain and trauma, the better. If I can beat the guy in 10 seconds in a way he doesn’t even feel pain, that to me is the best possible [outcome].

As to a date for a possible return to MMA, Rickson isn’t sure. Kron hasn’t fought in over two years now. Kron, 33,  featherweight, has a 5-1 record in MMA, with 5 submission wins.

“Right now we’re giving each other some space, you know? We had some small arguments and now he’s moved to Montana, he’s with his new gym there, he’s training. I don’t know exactly what his plans are for MMA, but I root for him. I know he has great potential, not only as a fighter, but also a great teacher, a great man. I’m rooting for him, and I’m also curious, like everybody else, to know what he’ll do next.”

Relson Gracie (Kron’s uncle) had shared a few words of opinion on Kron’s decision to opt for striking.

In an interview for Canal do Marinho on Youtube, he said: