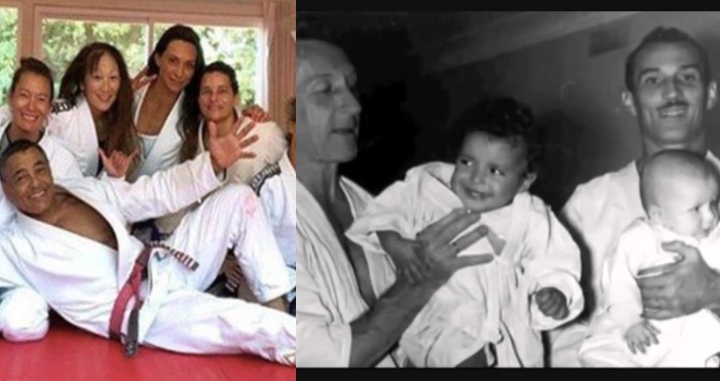 Every family has its share of dramas and the Gracies are no different. They are just like us after all.

It is a little known fact that brothers Carlos and Helio Gracie had a polygamous lifestyle where they would have children with many different women. Some of the women were maids and nannies while others were wives of their students…

The goal was to build an army of male Gracie fighters for the future in order to spread Jiu-Jitsu all around the world.

Rickson Gracie recently revealed the family secrets on the Trocação Franca podcast about who the real mothers of Helio Gracie’s children was.

“My uncle and my father had the intention to create a clan of fighters and, in order to do that, they couldn’t be limited to one relationship and two or three kids.”

“I think that’s a truth that has to be told at some point. I didn’t know the reality when I was born. I always saw Margarida as my mother, completely, and didn’t see it any other way. I believed that up until I was 16. After I started connecting the dots and started to make things make more sense, I really understood that my real mother was a nanny that my father had for a long time. With [Margarida’s] agreement, they had a scheme that they had three kids.”

“After it was uncovered…we always treated her differently, as a unique nanny that later transformed into mother No. 2, you know? We treated her nicely, but she never opened up about that fact, never opened up about being our mother. We never spoke openly about it. The only time I tried to talk to her about it, I was already married, I think it was in 2006 or 2008, and she said no one in her family knew about that yet. She kept it a secret. Since she wanted it that way, I didn’t want to force anything by coming now as a new son.”

“When I was 12 years of age, my father asked me, ‘My son, would you like to have more siblings?’ I said, ‘Yes, dad,’ but what a weird question that was. I still thought I was son of [Margarida],” Gracie said. “We hopped in the car and left the house in Flamengo and when we got to Botafogo, we got to an apartment in the sixth floor and when the door opened, one lady showed up and I started seeing heads popping up behind her. There were four at that time: Rolker, Royler, Royce, and Rerika. Ricci and Robin had yet to be born.”

“I saw those kids, and [Helio] said, ‘They are all your siblings.’ That was a surprise to me, but I can say it was a pleasant one. But, from the point of view of his relationship with my mom [Margarida], she was surprised by those four kids, who later became six, and it was traumatic because she hadn’t agreed with it, and she probably didn’t know about this story either.”

“She was disappointed when she found out about it, and I started seeing a side of — I wouldn’t call disrespect, but lack of love, lack of partnership, that bothered me at the time,” he said. “I didn’t want a girlfriend that had that type of relationship with me, a weak relationship, of not knowing what I do, not being OK with the things I want, etc. That was not what I wanted for me in a relationship, and was a reference for my future.

“I saw that in my mom [Margarida], even though she did it all for love, it got to a point where her depression, her sadness for not being able to satisfy him through her own powers, she felt like she didn’t succeed in the end. I felt a lack of joy as she got older, and that impacted me a lot. Thinking about it, seeing this relationship, that’s not something I wanted for my life. Even though I admired my father as an example, as a general, as someone with many [qualities], on the relationship side, I felt he lacked a bit.