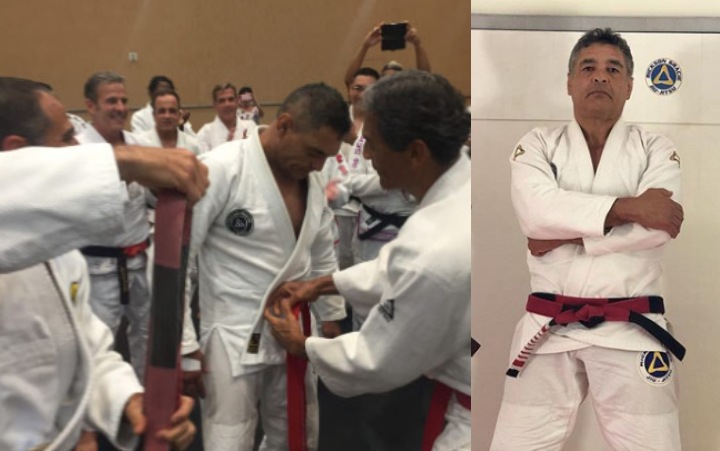 Rickson Gracie has been traveling the world, doing a series of seminars. But one prominent thing about him is that he was spotted wearing his old coral belt and not the red belt that he was given two years ago.

It’s important to note Rickson was given the red belt by his older brother Rorion Gracie several years shy of the actual outlined red belt requirement.

According to Renzo and Royler Gracie, in Brazilian jiu-jitsu the red belt is reserved “for those whose influence and fame takes them to the pinnacle of the art”. It is awarded in lieu of a ninth and tenth degree black belt. If a practitioner receives his or her black belt at 19 years old, the earliest they could expect to receive a ninth degree red belt would be at the age of 67. Brazilian jiu-jitsu red belt holders are often addressed within the art by the title grandmaster.

“Rickson can and deserves to wear the belt he wants. He can. And he deserves it. But if I were in his place, I wouldn’t have accepted it.  “

However his initial reaction to the red belt was positive:

He changed his mind. In this interview featuring Rickson Gracie, Renzo Gracie, Matt Serra and Jim Norton, they called up Rickson and asked him to explain exactly why he refused the red belt that Rorion gave him: