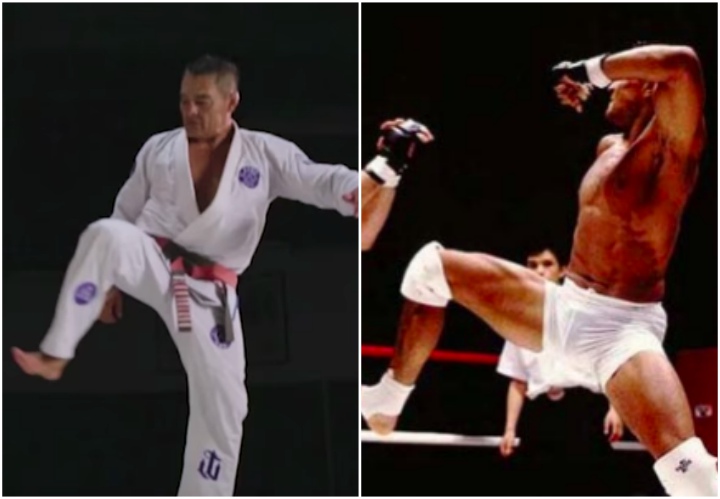 In the majority of Brazilian Jiu-Jitsu academies around the world, they will teach you the sport aspect of Jiu-Jitsu. This means no strikes, and little self defense, but more focus on the modern sweeps, guard passes etc.

Most people think of Gracie Jiu-Jitsu as a grappling sport. Truth is Grand Masters Carlos and  Helio Gracie created a complete system of self-defense which is based on grappling but also includes some of the most effective strikes.
In this video instructor Marco Moreno (black belt under GM Relson Gracie) demonstrate some of those strikes involving the hardest parts of the human body to incapacitate an opponent, to set up other attacks or to break free from an assailant.

In this video (above), Rickson Gracie demonstrates his approach to striking, protecting himself, closing the distance and clinching.

Rickson used this exact method to win his many fights in the street in Brazil and in the ring in vale tudo and MMA fights.

Rickson Gracie in this article from black belt magazine talks about why Grapplers must also know how to strike:

“To be a well-rounded fighter, you must possess the ability to strike and grapple. Using punching to complement your grappling and ground-fighting skills is very important. In fact, it is necessary to have a background in striking if you wish to excel in MMA fighting events. For instance, if you’re a grappler and you want to be able to close the distance between yourself and your opponent, you must understand how to strike.

A good sense of timing is especially important for you to develop. You must be able to judge the potential danger of the movements of your opponent. Knowing the right time to block a technique and avoid taking punishment from your opponent’s blows is also a product of good timing.

If you are competing in a wrestling match, you might not need to have this type of understanding of timing, especially while you and your opponent are on your feet. But to succeed in MMA competition, you absolutely must have mastered this element of fighting. That will enable you to shoot in for a takedown and totally avoid the punishment your striking opponent will try to inflict as he struggles to avoid being taken to the ground.

When a fight goes to the ground, I find that being on the bottom and holding my opponent in my guard is very advantageous for many reasons, including the striking possibilities it presents. There are many things I can do on the ground, and I can formulate a strategy there.

Striking can mean much more than just punching with my fist. Punching constitutes only about 15 percent to 20 percent of the possibilities. The rest are knee strikes, head butts and elbow strikes. All these techniques are important to know because you must consider the damage that can be done to your knuckles when you execute too many strikes with your fists.

When it comes to MMA fighting, I would much rather look for an opening for an effective grappling move than focus on just hurting my opponent with some type of strike. I always look for the possibility of employing a submission technique, and I always try to defeat my opponent in the most humane way possible, without any unnecessary violence.

I don’t think martial artists must focus on violence when they compete, and one way to avoid that is to choose a submission technique over a striking technique. In any encounter, it is good to be as gentle as possible.”