Rickson Embarrassing Students When Teaching? You Better Check Your Ego 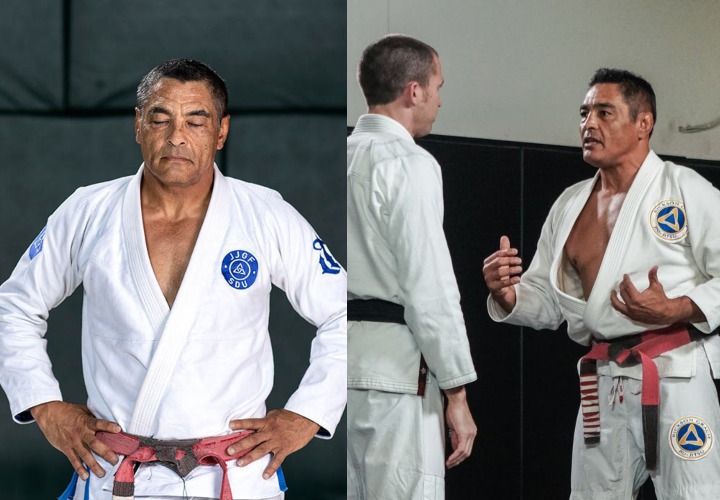 A few weeks ago, we had published an article that pointed out a certainly unique teaching style of Rickson Gracie, putting up for discussion on whether or not his coaching approach is something that places people into an embarrassing position.
This discussion has given voice to many who are saying that his style is „unacceptable“ and flawed. However, it has also given voice to another school of thought: that it is actually a very beneficial approach for the students involved. This is very well depicted by Kama Jiu Jitsu‘s instructor Ryan Young.

Young points out that, even though it might look like to some that Rickson Gracie is embarrassing students at his seminars, that this is not actually the case but rather a mixture of two things: his approach that is based on testing the vibe of the room and the student’s perspective.

Essentially, Young points out that when Rickson goes to another school to teach or do a seminar, he is looking to find out what the students over there already know and don’t know. When he pulls someone out and wants them to demonstrate whether they can, let’s say, defend from punches – he’s not doing this to ridicule them, but to see what their current skill level is.
Furthermore, the reason so as to why he chooses a higher belt for the demonstration is simply because the lower belts are not really expected to know the proper technique. This leads to a great conclusion, one aimed at making students into better jiujiteiros then they currently are: if everybody in the room sees that even a higher belt and/or a more experienced practitioner don’t know how to do something, then they will feel the need to start learning as well.

There’s an important takeaway here, Young emphasizes: if you are pulled out by someone like Rickson, you have an opportunity to have your own deficiency pointed out. You are then in an advantage, because it will be your deficiency that’ll be offered a solution to and worked on throughout the seminar.
However, this is where the second part of the calculation comes into play. Ryan elaborates that if the student has a big ego, and if he sees the process of pointing out the gaps in his knowledge as something that puts him into an embarrassing position, that it is then understandable that someone could have an opinion of Rickson’s approach as not a particularly positive one.

But, Young points out, here’s the point: if somebody is telling you that what you’re doing is wrong and then offers you a solution to improving in that aspect, then that is constructive criticism. In other words, you might not like the way the solution to your problem was delivered; but you now know what the problem is and have a solution to it!
If the person’s constantly thinking of being embarrassed, they lose the potential of the lesson being taught. So, if the instructor notices that the student takes their lesson as an embarrassment, then he might not want to teach them anymore.

For that reason, Ryan advises students to try and humble themselves – in order to learn more and to progress more, in a sort of an approach that will make them both happier and better jiujiteiros in the long run.
Disregard the way the message is delivered, if the value of the message is substantial – don’t look at the delivery, but at the lesson itself.

Watch the video below to hear more on Ryan’s thoughts: