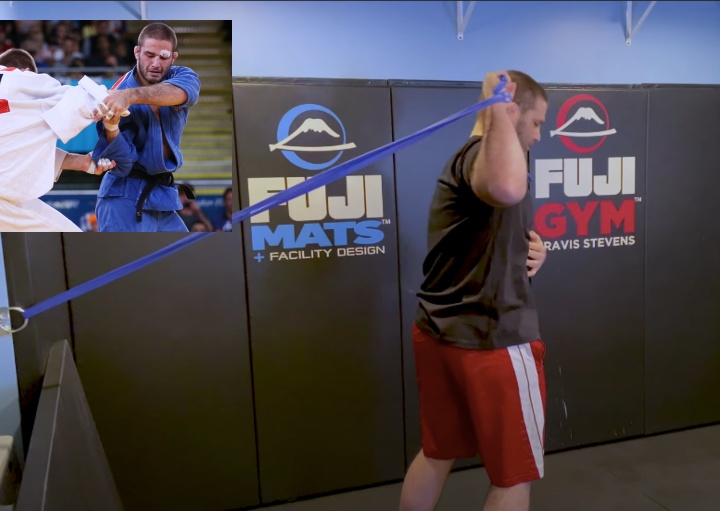 You can craft a full-body workout with a resistance band and little else. This unassuming piece of equipment opens up a world of interesting exercises while adding sharp teeth to simple, age-old exercises. It would take all day to detail the countless ways that you can use a resistance band. For now, we cover a few calorie busters and a couple of muscle shredders.

The appeal of a resistance band is in its compact form and its versatility. You can carry it with you when you travel, or you can use it at home to add a little edge to your workouts. Resistance bands also allow for low-impact exercises as alternatives to riskier exercises that involve free weights.

Keep going to see how to target every muscle group with a resistance band. You’ll learn how to kick simple exercises into high gear and master complex moves that will keep your body on its figurative toes.

Resistance bands started their fitness career in physiotherapy before making their way into homes and gyms. Their compact, lightweight form allows them to fit nicely in your luggage or gym bag, giving them an advantage over free weights.

Better still, resistance bands can match actual weights, pound for pound. All you have to do is find a band of a type and resistance that suits your needs.

First things first: Resistance bands have a color code that clues you in on how much give you should (not) expect from them. Light-colored bands have less resistance than darker bands, with the black band being the toughest one to stretch.

It’s worth noting that some resistance bands come in different widths, and the wider they are, the more resistance they put up. The same goes for thickness, with thicker bands offering more resistance. This being said, be sure to read the packaging to confirm that the resistance band you’re eyeing matches your fitness level.

You can also describe resistance bands by their purpose or by the muscle groups they target. For example:

This resistance band looks like a giant rubber band, except with a broader cross-section for your comfort. The flat band is one of the most common bands in the market, and you’ve probably come across one at the gym. Like most resistance bands, the flat band comes in different colors that indicate its resistance. Loop bands also come in different widths, with wide bands being more challenging than narrow ones.

A flat band is the smallest and simplest type of resistance band, making it ideal for improving flexibility. This is why the band is popular with physiotherapists, who use it to improve their patients’ range of motion. Middle and long-distance runners also use the flat resistance band to stretch before or after a run.

This band is thicker than the flat band, and it packs a lot more resistance per unit length. The pull-up resistance band demands more of your muscles, which is what you want if you’re looking to sculpt your body.

Depending on your needs, pull-up bands can make exercises more challenging, or they can make them easier. If you have a hard time with chin-ups, the elasticity of the pull-up band will boost you and help you clear the bar. On the other hand, the band can put your muscles to work by adding more resistance to regular exercises like the squat.

The band comes with functional handles that increase the variety of exercises that you can do. Handles also make the pull-up band easier to use, which makes your workout more productive.

Think of the resistance tube as the prototype to the resistance band, which is precisely what it is. Remember when we said resistance band started as a physiotherapy device earlier? That device is the tube that healthcare workers assemble with surgical tubes.

A resistance tube is simply a length of an elastic material with handles at both ends. This makes the device versatile because you can anchor one end to any spot you want. You can anchor one end with your feet, or you can loop the handle around any stable fixture in your space. The handles of the resistance tube are comfortable, allowing you to do as many reps as you need to.

A figure-eight resistance band gets its name from its shape, which resembles the number eight. Both ends of the band have grips that give you solid hand-holds as you work out.

The figure-eight band is shorter than other types of resistance bands. It is a good fit if you’re transitioning from weights to resistance bands, and it helps to build muscle at an impressive pace.

What you get from exercising with resistance bands

Take your favorite stretch, lunge, leg-raise, or squat exercise. It will pack more of a punch if you add a resistance band to the equation. This means that the learning curve of using any variation of the resistance band is gentle, often taking a few short minutes.

Best of all, you can do a full-body workout with one resistance band. Switching between different types of bands makes it possible to do an all-out, high-intensity workout. Resistance bands also allow you to build on your progress whether you’re looking to sculpt your body or build endurance.

What resistance bands can and cannot do

Exercising with a resistance band is a great way to build endurance, develop lean muscle, and burn calories. However, free weights are more ideal if you want to build muscles like a bodybuilder.

It bears mentioning that you meet your fitness goals by practicing consistency. This means showing up when you need to and consistently breaking your personal records. It also means that a resistance band is no substitute for doing the actual work.

With that, let’s go over some practical and fun exercises that you can do with the humble resistance band.

The exercise targets the muscles in the lower back, core, and thighs. As you resume a standing position and pull the resistance band above your head, you will also work your arm, oblique, and chest muscles.

Hold the resistance band and anchor it with both feet, which should be at a shoulder-width distance from each other. Next, pull the band’s handles next to your shoulders, with your palms facing inward and the elbows tucked in. This is your starting position now:

Do as many reps of this move as you can, all while keeping good form. Remember to use a resistance band that gives you enough of a challenge without the risk of injury. With time you can graduate to a more challenging band.

2) Lunge with a lateral shoulder raise

The lateral shoulder raise works the muscles of the core, lower back, sides, chest, and arms. These muscles have to work extra hard as you stretch the resistance band. The lunge works the core, glutes, and legs.

Get into the lunge position by putting your right leg in front of you and your left leg behind you. Anchor the resistance band with the front foot and hold the ends with your hands, like a skipping rope.

3) Glute kicks with a resistance band

This exercise targets muscles in the arms, chest, abdomen, back, glutes, thighs, and lower legs.

Get on all fours and loop the resistance band around the leg that you’ll be exercising. Your hands should hold the ends of the band like a skipping rope. This is your starting position for the backward kick; now do the following:

This simple exercise works your torso and, to a lesser degree, the lower body. It is an enjoyable exercise that you can do wherever you are (if you can take care of the resultant sweat).

Do 15 to 20 reps, or as many repetitions as you can handle without sustaining an injury. With time, you can use a thicker resistance band to give your muscles more of a challenge.

Start the push-up in the plank position, with the band over your shoulder blades. Your hands should pin the band to the floor by its ends. Now do the following:

Get as many reps as you can, and remember to keep the perfect form for each repetition. This means your spine should remain straight as you raise and lower yourself. Contracting your stomach muscles helps to keep your spine from arching or sagging.

This exercise allows you to keep good form while forcing your leg muscles to fight for stability with each rep. Your starting position is with your feet at hip distance, with a flat band around them, right above the knees. Note that the band will do everything in its power to knock your knees together.

This is a standing exercise that targets the muscles in your arms and shoulders. Start by putting your arms in a resistance loop. You can grasp the loop with the palms facing outward, or you can position the loop around your wrists.

Extend your arms over your head and with your back against the wall. This helps you to keep good form. Now, pull your arms down so that each arm forms a 90-degree angle at the elbow. Do this by bringing the shoulder blades together as you stretch the resistance loop. The band should now extend wider than your shoulders.

This is a full-body exercise that works the arms, legs, and torso. Place a resistance loop right above the knees and get on the floor, on all fours. As you kneel, your knees should be right next to each other. Your neck, back, and hips should form a straight line, which means that your spine should neither arch nor sag. Now do the following:

This is a full-body exercise that does an excellent job of working the oblique muscles at the sides of the torso. The resistance band also activates your core, lower back, glutes, and legs.

Put a flat band around your legs, right above the knees, and assume the high plank position. Bend the leg that touches the ground at the knee. The free (top) leg should extend to form a diagonal line with the rest of the body. Keep your spine neutral, engage the core and engage your glutes.

Keep your free arm at your waist as you lift your free leg. This action will force your muscles to pull against the resistance band. Lower your leg slowly, all while resisting the tug of the band. Do as many reps as you need to before switching to the other leg.

This challenging full-body exercise requires you to balance your body as the resistance band tries to tip you over. At some point, you’ll only have one foot on the ground as the resistance loop tries to get both your legs back together. Prevailing against the band puts multiple muscle groups to work. Here are the steps:

You can add a little difficulty to your workouts by adding a resistance band to the mix. Take care to maintain good form with each rep, and you’ll enjoy rapid results that will surprise you.