Renzo Gracie: ‘Sakuraba Breaking My Arm Was The Worst Pain I’ve Ever Felt in my Life’ 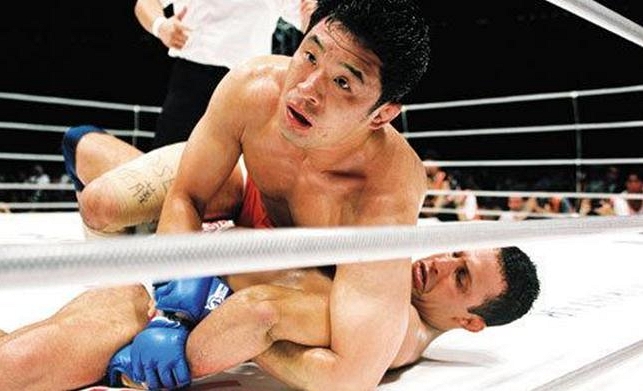 Considered by some to be the most complete mixed martial artist the legendary Gracie family ever produced, Renzo Gracie defeated five UFC champions during a career which straddled the no-holds barred and modern MMA eras. Renzo talks about Sakuraba breaking his arm/shoulder by Kimura in Pride FC.

“In my life, I always believed that if I had an injury, I would never give up,”  “If that happened in the fight, in the old times, people would keep fighting in the ring. But they stopped the match. In reality, my whole life, I thought I would do that in that situation. I would never tap. But you can never be 100 percent sure until that moment arrives and you feel that pain. That was the most pain I ever felt in my life, but I was happy I went through that, even though it hurt a lot. I was smiling the whole time. It was the moment I found out my mind was stronger than my body.”

“I knew I could beat him. I had all the tools to beat him. I was very confident. There was a time when I really believed nobody could beat me. I trained a lot and I was in good rhythm. I had just fought a very tough guy in Alexander Otsuka. I thought if I could get my hands on Sakuraba, I would win. The only thing, I don’t want to say I regret, but I worried about my defense the whole time. I played it safe. I thought I had the fight won. With 17 seconds to go, I got caught in the armbar. I wasn’t naive. I made a mistake, but I didn’t expect him to be so strong in that position. When I fought him, I was 172, 170 pounds. He was used to fighting guys 200, 205 pounds. I didn’t expect the strength that he had and I got caught.

“It was one of the biggest lessons I learned in my life. A fight is only over after the bell sounds. In my head, I was celebrating victory and knew how much time was left on the clock. I was on his back. I controlled the fight standing and when he was in my guard. I was feeling like I had the fight won and I got caught in the armbar. It was a beautiful lesson. I’ve taught my students to never believe the match is over until it’s over, not until your arm is raised. It was an unforgettable day. Sometimes defeat teaches you better than a victory.”

“If you lock me today in a cage, where there’s no light coming in, and feed me only enough to survive, if you open the cage door 10 years from now, you’ll find me smiling at you. In my head, I accomplished much more than I ever dreamed I would accomplish. I’ve already lived a full life and I’m only halfway there. In my head, I still have another half of my life to live. But I feel like I’ve already lived three normal lifetimes. I was not only a champion in sports, but the friendships I’ve been able to build, the love I’ve received, the love I’ve had to give, and there are moments that will stay with my the rest of my life. I’ll have the best memories anyone ever had.”

“I always thought I’d never leave Brazil. I love the people. I love the food. I love the culture. I love the language. I had everything I wanted there. If I wanted to talk to the President of Brazil, two days later, I’d have a meeting. I went to New York, and I was just another Mexican or Puerto Rican. I expected to live forever in Brazil. But when I came to New York, I saw such a mix of cultures. There was so much I could learn from. I fell in love with New York. So I proved Sinatra right, that if you can make it there, you can make it anywhere.”

“The most important thing I did was to guide people that I love in the right direction. I’ve seem them succeed, build families, build a living, and understand the beauty of what we represent. Your sons are like arrows and you are the bow. I was so glad to have Ricardo Almeida, Chris Weidman, Georges St-Pierre, Matt Serra and his brother, and the Jersey Shore Guy, Frankie Edgar. They became family members, not friends.”