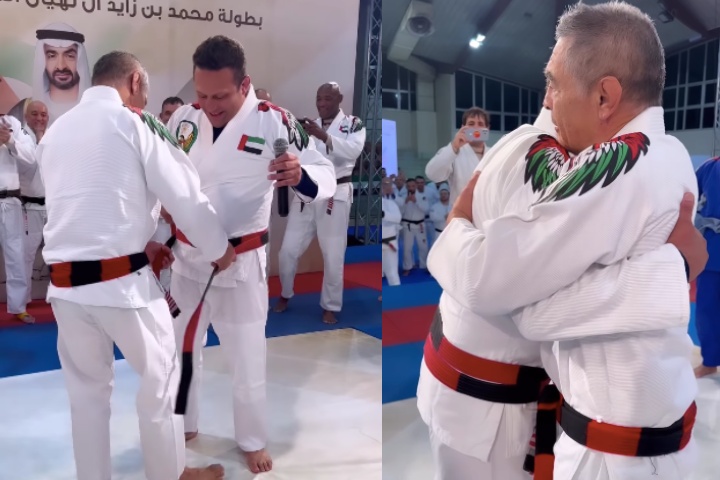 After a lifetime of training Jiu-Jitsu (50+ years) Renzo Gracie has joined a very small group of coral belt owners. Only a few and those who gained a black belt will receive this honor.

Renzo Gracie, one of the most influential personalities in the history of jiu-jitsu, received his coral belt today from his uncle Rickson Gracie at a ceremony held in Abu Dhabi. The Coral Belt is a 7th degree black belt awarded to those who have been active black belts for over 30 years. The IBJJF requires a minimum of 7 years of training and teaching at the black and red belt level before advancing to the next rank.

A two-time ADCC World Champion (1998, 2000), Renzo was inducted into the ADCC Hall of Fame in September 2022. He is also a Pride and UFC veteran. Currently, the founder and active trainer at Renzo Gracie Academy in New York. For many years, his club was represented by such personalities as the Ryan brothers, John Danaher, Garry Tonon, & Eddie Cummings. The grandson of the creator of BJJ, at the age of 56, joins the group of almost 40 holders of this rank around the world.

Black Belt – The black belt is the highest common belt within Brazilian Jiu Jitsu and denotes a very high level of technical, tactical and mental understanding of the sport. They are often addressed as “Professor”. If there are multiple black belts at the academy, generally the Head Coach will be addressed as Professor. At this point the stripe system changes.

Red / Black (Coral) Belt – When a Brazilian Jiu Jitsu black belt reaches seventh degree he is awarded an alternating red and black (also called Coral) belt. They are generally considered practitioners who have made a great impact into the world of Brazilian Jiu Jitsu and are often called “masters”.