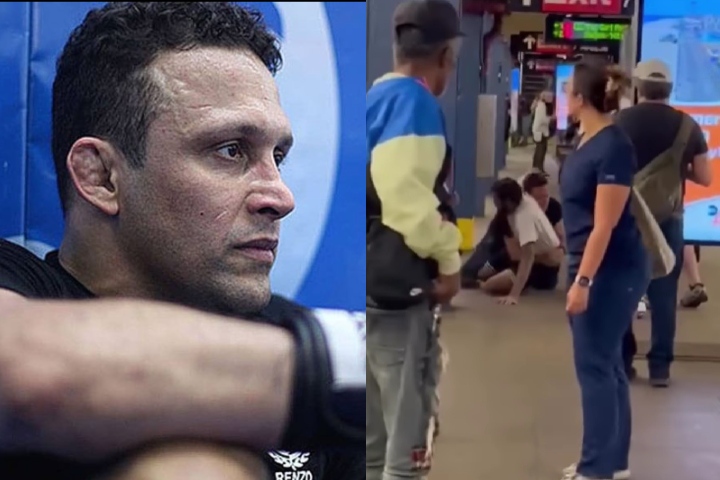 Renzo Gracie was recently seen engaged in a fight, in a New York Subway.

It is reported that the popular Gracie was having a conversation in Portuguese, with one of his fellow Brazilian Jiu-Jitsu black belts and staff members. Then, he was confronted by an individual for speaking a foreign language, who was yelling at Renzo to “speak English here [in the USA]”.
Renzo then responded, accusing the aggressor of racism – and a fight ensued.

As can be seen on the video below, Gracie was caught by surprise and was taken down by the assailant, but he quickly reversed him and started Body Lock passing his legs. A female witness tried to pull him away from the other person, but was stopped in doing so by another bystander.
It’s reported that Renzo quickly established an Arm Triangle hold and got a “verbal tap”; with the perpetrator apologizing. So, Renzo released him soon after. Renzo made him apologize.

“🚨BREAKING: Video footage of Martial Arts legend Renzo Gracie in an altercation on the platform of a New York City Subway station. After coming back from an Academy Gracie was having a conversation with a fellow black belt and staff member when he was confronted for speaking Portuguese with his friends. Based off of information we retrieved from an audio recording on Whatsapp, Gracie stated that the aggressor was a black/ dark skinned man who was yelling at him to “speak English here”. In the audio recording Gracie stated that the young man accused him of speaking bad about him in Portuguese. Gracie responded saying that his accusation was ridiculous and racist. A fight ensued. According to Gracie the man begged to be let go from a Kata Gatame saying “I can’t breathe, I can’t breathe”. While controlling him Gracie made the assailant apologize and released him saying “you see, you’re a nice guy. Why are you doing this? why are you so impolite?”

There has been a short official statement made by Gracie on the choke lab instagram page:

Renzo commented on his fight video:

Renzo Gracie is one of the most beloved – and most charismatic – BJJ athletes and coaches in the world. His love for the Gentle Art knows no limits, as he’s said in an interview for the Frota Academy:

Jiu-Jitsu is a foundation of a huge building. It’s a way of life.

He is grateful for being a part of Jiu-Jitsu history and for the opportunity to transfer knowledge:

One thing that I see that has been of importance through my family is – keeping the knowledge alive. Strengthening the spine of this amazing sport.
I feel very honored to be a link on this amazing chain of relatives and people, and those who will come after me to keep teaching Jiu-Jitsu, to keep passing the knowledge forward.