Refine Your Basic Mount Escape – And Make It Work Every Time 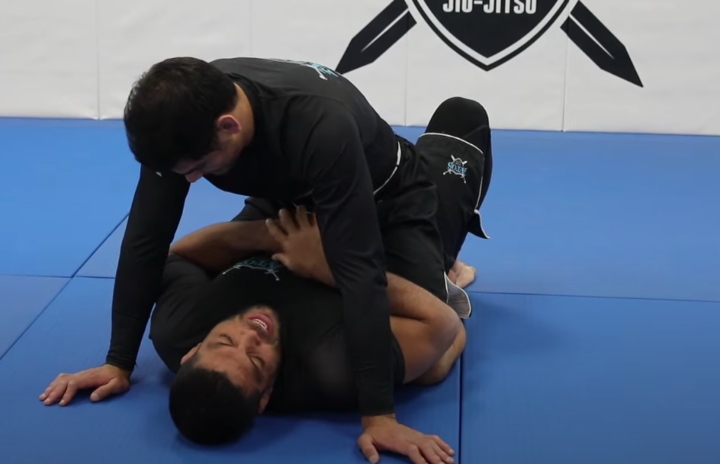 Basics… Work! And they work well, but the thing a lot of jiujiteiros make a mistake in is in thinking that just because something „works“, that it’ll work in the same way for every situation. And that’s simply not the case. Everything in Jiu Jitsu is about adaptation, and so you have to adapt even the most basic of techniques to what your opponent is doing. This is very well seen with escape techniques – you can execute a certain escape technique in a perfect manner; but if your opponent counters it in an intelligent way, then you’re still stuck.
Let’s take a look at the basic Mount escape and see how you can make it better through adaptation. Andre Galvao demonstrates and explains.

WHAT IF THEY’RE HEAVY?

In the case of a basic Mount escape, Andre demonstrates that you’d make a good frame against your opponent’s hips with one of your forearms and clasp the top of your hand with another one. Then, as you have one of the legs straightened out on a floor and the other one bent, you’d push against their hip; bridging as you do that, until you pass your knee cap under their knee. From here, you’d bring their thigh in-between your legs, turn on the other side and escape there as well – recovering your guard as a result.

This is a great technique. However, you’ll find great difficulty in making it work against an opponent that is heavier and stronger than you – but, more importantly, you’ll find that it’s incredibly difficult to do this if your opponent sprawls.
You know the deal; you place your forearm against their hip and then they sprawl, leaving your arm stuck underneath their bodyweight. What should you do from here, then?

The thing is, even though your arm is stuck, you can still use it to push against their hips. But now you have to adapt, as you won’t push their hips down towards your legs for immediate benefit. You’ll be doing this in order to create a reaction!

And the reaction? Give it a shot; the moment your opponent or training partner feels that you’re pushing them down, they’ll react by pushing back into you as a result. This is the moment you will use to escape from the Mount.
Andre shows that you’ll, basically, use both of your thighs to elevate your opponent and, thus, create the space necessary for escape.

Here’s how it looks. Feeling that his training partner is pushing back against him, Andre elevates both of his legs in order to push the partner forward. At the same time as he does this, Andre uses his frame – his forearm against the hips – to bring the partner even further forward, over the top of his head. Once he’s over the top of his head, Andre has created enough space for the escape.

As he off-balances his training partner, Andre takes advantage of the space presented in-between the partner’s legs – he places his knee inside of it. In other words, Andre has a frame now! He reinforces it by crossing his other leg over the partner’s and pinching his knees, getting an X-Guard.
From there, you’ll have a lot of Leg Lock attacks at your disposal; such as a Heel Hook, a Toe Hold or a Calf Slice – the choice is yours.

And just like that, you’ve gone from a bad position to the one where you’re on the offense! Watch Andre’s detailed demonstration of how to refine your basic Mount escape on the video below: